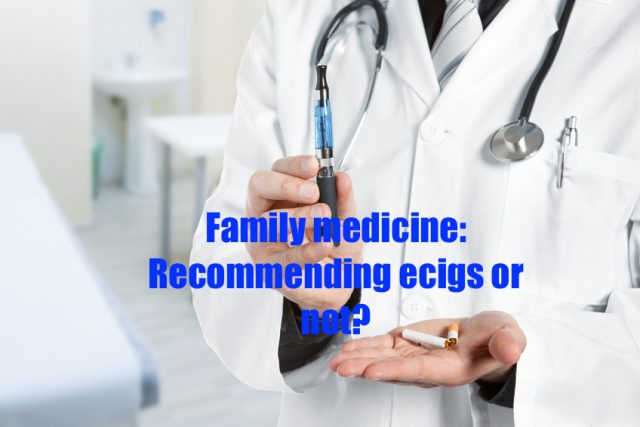 The lead author, Adam Goldstein of the University of North Carolina, disclosed no conflict of interest in the field of his article advising physicians not to recommend e-cigarettes for smoking cessation [2], a misleading information that is pinpointed by Michael Siegel on his Blog.

Dr A. Goldstein, Professor and Director of Departmental Advancement at the University of North Carolina (UNC) Department of Family Medicine did receive fundings from Pfizer, as disclosed below.

Pfizer awarded over $6.5 million in grants focused on smoking cessation to 54 organizations nationwide among which $500,000 were attributed to the Department of Family Medicine of University of North Carolina at Chapel Hill.
Pfizer also markets the stop-smoking drug Varenicline (Chantix/Champix).
M. Siegel also judges that the medical recommendation in the article is “misguided and damaging, but the evidence presented to support it is highly biased and incomplete.”

Published in the American medical journal Annals of Family Medicine, an article [1] written by Ann McNeill, the Professor of Tobacco Addiction a the National Addiction Centre of the King’s College of London, United Kingdom, advises clinicians to recommend to their patients using electronic cigarette since they are the first most popular way British smokers quit smoking, the second most popular cessation method being “cold turkey”.

“On average, each cigarette smoked cuts someone’s life by 11 minutes“

In her article, the author explains that smokers go on smoking because of their need of nicotine which is brutally delivered in high dose when smoking and creates the hit that users need. In contrast, the delivery of nicotine by e-cigarette is smoother and allows sustaining brain’s demand for longer periods, which makes it much less addictive, delivered this way.

Despite the lack of scientific evidence on their effectiveness for smoking cessation, specialists’ comments and testimonies of ex-smokers converge to support ENDS as more efficient as placebo cigarette but also as more enjoyable in a cessation process than nicotine patches or gums.

Chemically, the vapor also contains harmful or potentially harmful compounds but in a much lower amount than in combustible cigarette, which makes tobacco specialists more prone to recommend e-cigarettes in a individual smoking cessation process.

“Delivering very brief advice to quit takes less than a minute, and can save lives” -A. McNeill.
Physician, clinicians and GPs would prefer their patients not to use nicotine and may be reluctant to advise smokers to switch to e-cigarettes because of the absence of guarantee regarding the long-term safety of these devices. In revenge, long-term safety of nicotine use is guaranteed and some kind of misunderstanding remains between e-cigarette use and nicotine use.

Ann McNeill deplores that the discourse of health professionals do not pass the researchers’ messages on and keep patients in the doubt when it is not advising them not to use ENDS, making dubious and nonsensical arguments.

An illustration is provided in the article following McNeill’s in the editorial list of the same journal, Annals of Family Medicine, and signed by two clinicians [2]. A four-point argumentation against e-cigarette says:

The authors’ arguments have been vigorously opposed point by point by Clives Bates in a public response to this article entitled “No credible case against advising smokers to switch to e-cigarettes“:

“Smokers need encouragement, hope, and guidance if they are to stop smoking.” -A. McNeill.
As pointed out by Ann McNeill, a guidance is online for use by any clinician or smoker who is interested in the informed opinion of professionals on e-cigarette. After the new regulations introduced in Europe and the United States the potential users deserve clinicians to reassure about the quality and safety of e-cigarettes left on the market.

Not recommending ENDS as an alternative to smoking completely is a mockery of do no harm. There is a lot of evidence showing them to be significantly less harmful than cigarettes and significantly more effective at getting people off cigarettes than any other cessation tool. There for you actually do harm by not recommending them and watching your patient continue to smoke cigarettes.