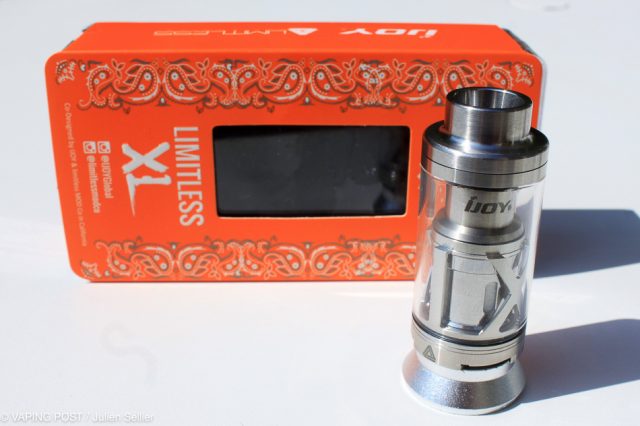 After the RDTA and the RDTA Plus, Limitless and Ijoy switch to XL with a clearomizer able to accept up to 215 W, according to its designers. No need to tell that I have not pushed it until this limit in this test. The Limitless XL is a clearomizer with a diameter of 25 mm. A perfect size that corresponds to any type of boxes with one, two or even three batteries, the latter being the only one able to comply with the highest range of this clearomizer, especially the Lux Dual by Ijoy and Limitless, for which it has been designed. As usual with Ijoy, the product is generously endowed. The pack includes the 0.15 Ω Chop Coil XL with a working wattage between 50 W and 215 W, two decks, a XL-1 and a XL-2 for a single and a dual coil configuration, respectively. Both decks come pre-mounted for the simplicity of use. The single coil mount consists in a pre-made fused parallel Clapton wire that displays 0.37 Ω on the device. The deck for the dual coil mount receives two dual fused Clapton wires. The disposable coil XL-C4 is also very impressive: It is made of 4 wires and bears a red LED at its base that lights up when heating. Maybe a gimmick but with a very cool effect.

The pack also contains a screwdriver, a top cap, a drip-top and many spare parts, and even a Pyrex tank. Complete. The coil and the mounting decks can easily be switched by screwing them at the bottom of the atomizer. For the XL-1 deck, it is worth using large rather than thin wires. The lower limit  is 0.5 mm below which the wire is not securized by the screw. When using complex wires like fused Clapton ones, mounting is just a child’s play. The deck’s width greatly contributes to this. It is also worth using 3.0 mm coils in order to fill the large liquid inlets, especially on the single coil deck. At the top of the Limitless XL, the designers had the excellent idea to put a large drip-top (14 mm) whose air flow is slightly reduced at its base (10 mm). It can be replaced by a 510 threaded top cap on which any type of drip-tip can adapt. Filling is from the top and requires unscrewing the top cap or the drip-tip. The chimney is very wide and there is just enough room for the pipette. Innovative, the fan-styled airflow ring is located just below the atomizer. The asset of this setting is that the air arrives straight under the coil(s), which optimizes the rendering of flavors. The counterpart is that unscrewing the atomizer from the mod is then mandatory to operate the mechanism, which is not really convenient. Another inconvenient is the formation of condensation over the box when moisture is exhausted through the airflow holes. But it is unlikely that it affects the functioning since everything is robust and well finished. After trying it, I did not really appreciate the 0.15 Ω XL-C4 disposable coil. Even if the designers give it to be used from 50 W on, it almost requires 70 W to develop its efficiency. But at this wattage, vapor is already hot although with airflow holes wide open. It requires tasty juices or tobacco flavors to enjoy this coil. At 120 W, the flavors are degraded because of the high temperature. However, for vapers who are looking for big clouds, it is a pure pleasure. On the picture, one sees the red LED at the bottom of the atomizer when pressing the Fire and also the moisture that accumulates. The single coil deck has been tested with the pre-mounted 0.35 Ω parallel fused Clapton ribbon wire. It is good at producing dense clouds at wattages starting at 40 W, with a good rendering of flavors. It has also been tested with a 0.85 Ω Clapton coil at 25 W, with an air flow almost closed for a peaceful flavor-oriented time. Vaping was agreable but with a rendering of flavors in the average. With a large atomization chamber and such a big chimney, the setting doesn’t help concentrating the flavors, leading me saying that this atomizer is not made for that. The velocity-type dual coil deck has only two holes. One would have preferred four to ease the mounting of two coils. The genuine mount is made of two fused Clapton wires with a resistance of 0.25 Ω. It is maybe the most convenient setting for this clearomizer. Starting at 60 W, it is very reactive. With the airflow holes open at 1/4, the rendering of flavors is already good and the vapor dense. The solution is maybe the reduced volume of the atomization chamber due to the presence of a the dual coil system. In turn, the system is heating fast. The Pyrex quickly becomes very hot as well as the Delrin drip-tip. It is worth switching to drip top and open the airflow to 1/2: the flavors will be sloghtly attenuated but the heating much better controlled. The technical features of the Limitless XL are:

Rating of 4.0/5. Well Finished, of good manufacturing quality, easy to mount with thick wires, the Limitless XL by Ijoy is a real cloud machine. No worries about it, even if it heats very quickly, even at wattages far lower than the 215 W maximum. But compared to the RDTA and RDTA Plus, the rendering of flavors is clearly not its priority. The fan-styled airflow is a clever innovation but not completely achieved since condensation forms at the exhaust and adjustment requires to separate the atomizer from the mod. Even if the Limitless XL is a condensate of good ideas, it deserves an encouraging “could be better” until comes a new model.