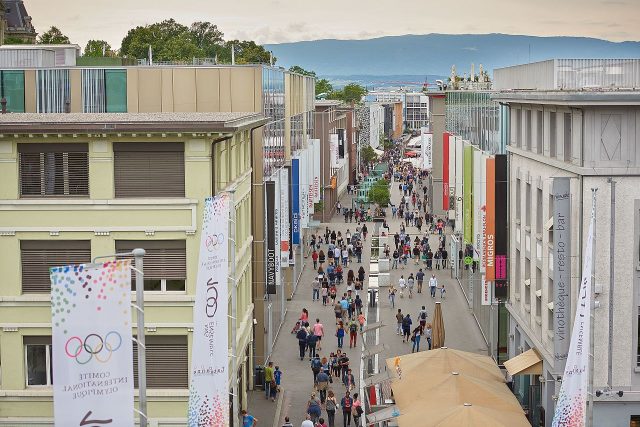 Like the more widespread e-cigarette, the IQOS Heated tobacco product, is the alternative to traditional combusted cigarettes that the Big Tobacco Philip Morris International is developing to reduce the risk associated to tobacco combustion. The products has been launched in Japan, last year and has been successful in reducing sales of conventional cigarettes.

A model for other IQOS stores

The strategic place where the tobacco giant decided to settle is the Flon, a popular marketplace in Lausanne. PMI’s concept is simple: half way between a store and a café/restaurant, the place is designed like the famous crunched-fruit high tech computer stores.

According to PMI’s spokesman, Julian Pidoux, “This innovative and design store can serve as a model for other “IQOS Flagship Stores” elsewhere in Switzerland and worldwide“.

The place will offer three levels comprising a vast store on the ground floor, with a place dedicated Art exhibitions; the basement will offer the possibility for night-clubbing, Art exhibitions and other meetings or workshops. Finally, upstairs will be a bigger place with a lounge café, a restaurant and co-working spaces.

The vast store (above 200 m2) will comply with opening hours of the others stores in the place. A restaurant-café will stay accessible to customers during the evening, till midnight during the week, and hopefully till 2 a.m. during the weekend. It will offer to users a terrasse with 30 places. The designer has received an envelop of €735,000 to furnish and equip the Flagship Store in Lausanne. After the first IQOS Store in Tokyo, other projects are presented for Milano, Lisbao, Moscow or Bucharest. But it is in Switzerland, where the company has its headquarters, that six stores are in project.

Switzerland however does not allow any smoking areas in public places but does not formally ban smoking in restaurants. As everyone knows, IQOS is made of a tobacco stick but does not generate smoke, so will it be allowed using IQOS in this place? Probably yes, but it must be concluded that IQOS, with its particular features is in a regulatory vacuum, which constitutes a selling argument for the company.

A vacuum that, unfortunately, leaves vaping products on the sidewalks, since Switzerland strictly bans nicotine in e-liquids. The incorporation of e-cigarettes and new tobacco products in the revised national tobacco law, as recommended by the big neighbour, EU, with its TPD, is the subject of a vigorous debate in Switzerland. Hence, such stores with e-cigarettes shelved along nicotine e-liquids in a trendy environment are very unlikely to open from a legal point of view, but also because no comparable financial support is available from independent e-cigarette manufacturers in the country.

In parallel to this announce, PMI also promotes the inauguration of the Italian Manufacturing Facility for Potentially Reduced-Risk Products, and a scientific update on these products, a first publication for quality assessment.