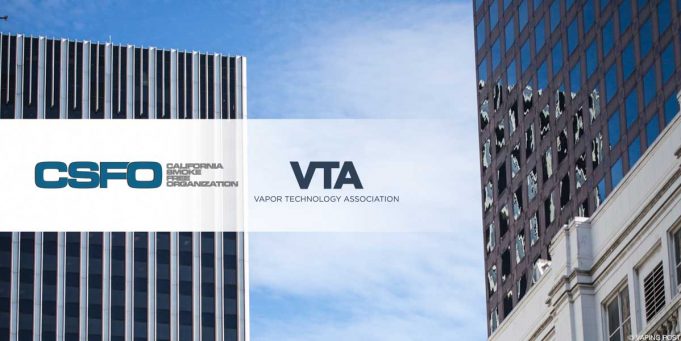 Californians will be voting on Proposition 56 on the 8th of November, and should it pass the state will become the fifth following Kansas, Louisiana, Minnesota and North Carolina to tax e-cigarettes. The vaping industry has already raised over $56 million to defeat the proposition, while some activists and health organizations have raised another $20 million. An example of an active campaign is Nix 56, a project set up by the organization Not Blowing Smoke (video), with the aim of raising awareness as to how the implementation of this proposal would have a negative impact on the general public, affecting negatively even citizens who don’t smoke or vape.

The founder of CSFO, Chris Jimenez has released a statement saying that the partnership with VTA will ensure “long term viability of the industry”, as the two companies fight the misguided regulations that threat the industry and its consumers, adding, “The recent actions taken by the California State Legislature made it clear to us that we needed to come together to craft a new strategy and message that will take California back from those attempting to crush our industry.  Teaming up with VTA has been invaluable. They have provided insight, strategy and resources to our association, and our affiliation with them has been essential to launching a redefined and professional approach to our fight against irresponsible state regulations.”

One of the projects that VTA and CSFO are planning to work jointly on, is promoting the implementation of the Cole-Bishop Amendment in order to counter attack the implementation of the infamous deeming rule by the FDA.
Similarly, the VTA’s National Legislative Director, Tony Abboud said that while he applaudes Jimenez and his team for possessing the willingness to take on the challenges ahead, joining forces with CSFO allows VTA to expand, and therefore have more resources and exposure, placing them in a position where they are able to exert more influence.

One of the projects that VTA and CSFO are planning to work jointly on, is promoting the implementation of the Cole-Bishop Amendment in order to counter attack the implementation of the infamous deeming rule by the FDA. The amendment which recently passed the Appropriations Committee aims to implement reasonable regulations that safeguard the safety of the industry’s consumers and safeguard the youth, whilst protecting small businesses and conserving the industry as a whole.

What does proposition 56 really mean?

Whilst opinions about vaping are mixed, with Dr. Ted Mazer, president-elect of the California Medical Association, calling the rise of popularity in e-cigarettes as an “alarmingly new public threat”, in the UK vaping products are researched and endorsed as effective smoking cessation tools and a significantly healthier alternative to smoking.

Finance experts in California have estimated that the implementation of Proposition 56 could lead to a state revenue of $1.4billion, which is said to be going to California’s Medi-Cal fund, a program that pays insurance companies and hospitals on behalf of low income individuals.  However, organizations like the aforementioned Not Blowing Smoke, are arguing that this is not necessarily true and that the revenue will only benefit these big corporations, “It goes directly to insurance companies and wealthy special interest groups. So of course the health insurance companies support Prop 56, it pays them as much as $1 billion more and does not require them to treat more patients or accept more Medi-Cal patients in order to receive this money.It just increases their bottom line and allows them to reward their CEOs and executives.”

Why this partnership is significant?

Considering all the above, this partnership between the VTA and CSFO is extremely positive news for the vaping industry and its consumers in California, as these two resourceful organizations are dedicated to investigate and battle current regulations and any possibly looming ones such as the above.

Great article. Very helpful information that covers all the bases!