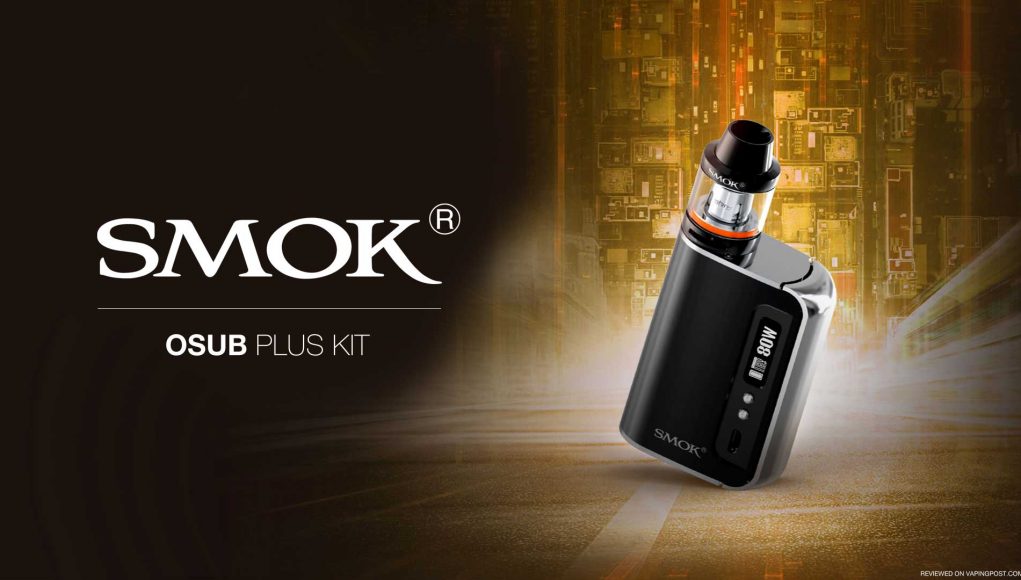 SMOK steps it up!

The SMOK OSUB Plus Kit comes with a top quality sub-ohm tank paired with an internal battery-powered mod device. SMOK has named the top piece the “Brit Beast Tank” and the internal battery device as The OSUB Plus TC Mod.

As most Vaping Mods typically have removable 18650 lithium-ion batteries, in some cases the batteries are 26550. Most take a single 18650 battery, but through much innovation, there are many more being designed as double battery devices with the ability to hold two 18650 batteries. Not to mention, with the release of the Reuleaux, we began to see a rise in popularity for triple battery devices, housing up to three 18650 batteries. This is why the OSUB Plus TC Mod manufactured by SMOK is so unique, it requires no inserting and removing of lithium-ion batteries, the mod itself is the battery and a quite powerful one in fact.

Each SMOK OSUB Plus kit comes with:

The OSUB Plus TC Mod has a 3300mAh internal battery which powers up this particular device, reaching up to 80 Watts and 0.8V-9.0Volts, a vast improvement from the original OSUB Kit, literally doubling the power, which was previously only 40 Watts. The Plus Kit version is equipped with temperature control mode ranging from 200 degrees F – 600 degrees F or 100 degrees C – 315 degrees C. The resistance ranges from 0.1 ohms-3 ohms (VW) and 0.06 ohms-2 ohms (TC).

Altogether, it was crucial to highlight the popular double-to-triple battery Mods since, at first glance, vapers might think the OSUB Plus TC Mod is a double-battery device – I certainly held that predisposition when first laying my eyes on this sleek, innovative new SMOK product.

An INPUT 5V:1A port is located directly below the “+” and “-” buttons beneath the OLED screen. This allows for the OSUB TC Mod to be rechargeable while also possessing the ability for upgradeable firmware all simply from utilizing a Micro-USB Cable – a cable is provided for the consumer as part of the box contents.

The most distinct portion of this specific Mod that seems to make it stand-out as one-of-a-kind is that it features an integrated streamline, big lateral firing key located on the opposite side of the 510 thread where the Brit Beast screws in. The OSUB Plus TC Mod measures at 75 x 25 x 54.5mm.

The best part about the fire key is that it takes up only half of one side. So if you press towards the bottom it won’t fire, you’ll just be pressing against a solid surface, but when you press the top portion, it will make a smooth click sound, powerup the coil and you can then begin or continue to Vape. Therefore, this particular feature is somewhat similar to the X-Cube Mod except the fire button does not take up the whole side portion of the Mod, only the top half of it.

The colors available for the internal battery mod device that is the OSUB Plus TC Mod comes in Black, Stainless, White, Blue, or Red. Not to mention, at the very bottom of the OSUB Plus Mod, there is a tiny hole used as a “reset” button, accompanied of course by a set of five mini ventilation holes on each bottom side.

Taking all that has been revealed about the OSUB Plus TC Mod, the most fascinating, convenient and innovative features are present in the settings, visible on the OLED screen. After turning on the device with 5 rapid clicks of the fire key, you will be greeted by the SMOK logo, then “OSUB TC” appears on the screen, followed by a big and bright “Welcome.” To get to the settings, all that is required is to click the fire key 3 times, rapidly and there will be a series of icons.

From left to right, the fist icon is for changing it to Temp. Control Mode or Wattage Mode, then under the same icon you are given the ability to change the “Drawing Effect” strength from MIN, SOFT, NORM, HARD, or MAX. Vaping this device at 45-50w on NORM is fairly powerful, so it’s difficult to imagine that any vaper would need the MAX drawing effect while on 80w.

The Fourth icon over will be for the Temperature Coefficient of Resistance (TCR), offering the ability to adjust the resistivity of your coil, whether Ni200/Titanium/Steel. After this, the 5th icon is of a settings wheel we’ve all seen before (often seen in modern technology applications). This specific icon can take you to another sub-menu which includes the option to choose “Stealth Mode” as ON/OFF as well as screen-saver-time, allowing up to 240 seconds of time on the OLED screen remaining lit-up.

You also have the option of adjusting “Contrast Range” from 5-100. Additionally, there is an extra decision for you to make and that deals with if you want to rotate the screen in 180 degrees. After the “sub menu” you can then choose the power ON/OFF icon followed by the next icon, representing “Exit Menu.” 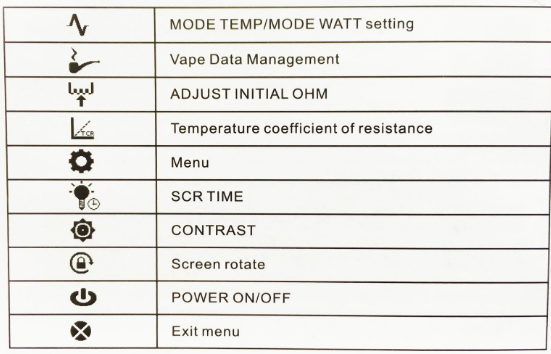 After reading about all the special Setting Menu features, it might seem like a lot of information to take-in all at once. Absorbing all that information about the features, certainly seems like overkill, so it is indeed overwhelming initially. However, in the near future of becoming more familiar with the device, it is so much more convenient than some may think.

The Settings features are by far what sets this Mod apart from the rest. It is largely significant to mention that it is very easy to quickly lock and unlock the device. This is very beneficial since the fire key can easily be pressed on accident while in your pocket or purse or wherever you store your Mod(s) on your person. To Lock/Unlock, simply press the “+” and “-” buttons together simultaneously or click the fire key 5 times rapidly.

With compliments to The OSUB Plus TC Mod, The Brit Beast Tank is equally impressive. The Brit Beast is comparable to a TFV8 Baby tank, barely a mere mini version of the Baby TFV8 tank made by SMOK. The Big Brother to each of these tanks is that of the TFV8 Cloud Beast tank, which holds 1/6th of a 30ml bottle of eLiquid with a 5ml capacity. The TFV8 Cloud Beast tank is probably one of the most popular tanks on the market as coils are scarce at vape shops around the Denver area.

Regardless, the Brit Beast has bottom airflow with a removable airflow ring for cleaning purposes. It is of course a top-fill tank with wide juice filling slots that has a capacity of 3.5ml, which is still going to provide you with a nice full tank. Filling it up all the way directly after priming your coil may produce some spitback. So, perhaps wait until your cil is nice and saturated before you fill it to the tippy-top.

To refill, simply unscrew the chuff cap drip tip (the only compatible drip tip for the Brit Beast). The Brit Beast Tank is made from Stainless Steel and is compatible with all cores of the TFV8 Baby tank – it’s an advantageous discovery to learn what is possible when the Brit Beast tank meets with the 0.4Ω V8 Baby-Q2 Core.

The possibilities are quite helpful since the Brit Beast core is compatible with all cores of the TFV8 Baby Beast. Very convenient. The Brit Beast measures in size at 24.5mm x 43mm and weighs 39 grams.

Many may ask, why would this be an issue when traveling through airport security? Stories have been told by some Vapers that when 18650 batteries are taken out of a device and stored properly, then this is far more beneficial for a vaper when having your belongings scanned and analyzed by airport security. Some vapers have said they were forced by TSA to throw-away their internal battery Mods while passing through the security line. Therefore, it is recommended by many vapers, that if you’re traveling and passing through TSA, take devices with batteries you can remove.

For instance, most advanced vaping devices or Vape Mods take either 1 to 3 18650 lithium-ion batteries. If you take them out, secure them in a protectable case, then your mod won’t accidentally turn on without your knowledge persay. To most vapers, there is truly not much of a difference when it comes to traveling from airport to airport with vape devices, yet many have retold stories of their beloved internal battery Mod being confiscated or transformed into instant-garbage as it’s tossed in the trash can. Not cool. So, be careful.

The scariest thing is not the batteries, it’s the lack of knowledge that non-vapers have regarding such technology. Regardless, better safe than sorry. Take out your 18650 lithium-ion batteries or if they’re 26650 batteries, doesn’t matter, just take them out and leave the internal battery mod at home – this would be typically recommended. Then again, we all talk to different vapers, perhaps in your own experience, this seems unlikely or unheard of. Rest assured, it is more than likely and has been heard loud and clear, so don’t take any risks.

The advantages certainly outweigh the disadvantages when it comes to to this particular vaping device kit. This OSUB Plus Kit would not be recommended for beginners, perhaps the first initial OSUB 40w device with a Helmet Tank would be more suitable for beginners. Yet, if you’ve been Vaping on the pens for quite some time and you’re ready to transition to a Mod device, this is a perfect kit for your transition.

So, whether you are somewhat new to vaping, for instance, you are long past the cig-a-like stage or whether you consider yourself more of a veteran vaper. Millions would classify themselves as veterans if they are actual vaping hobbyists, vapor enthusiasts or vape advocates. Hence, when it comes to describing the veteran vaper – your lifestyle would most likely consist of one of these combinations: nothing but Sub-Ohm tanks or RDAs, filling either one with Premium eLiquids ranging from 2 to 4mg nicotine levels, typically 3mg nic for as long as one or two years. Regardless The SMOK OSUB Plus Kit, whether post cig-a-like vaper or veteran vapor, this one is a MUST-Get. I repeat, The SMOK OSUB Plus Kit is a device you MUST-get!