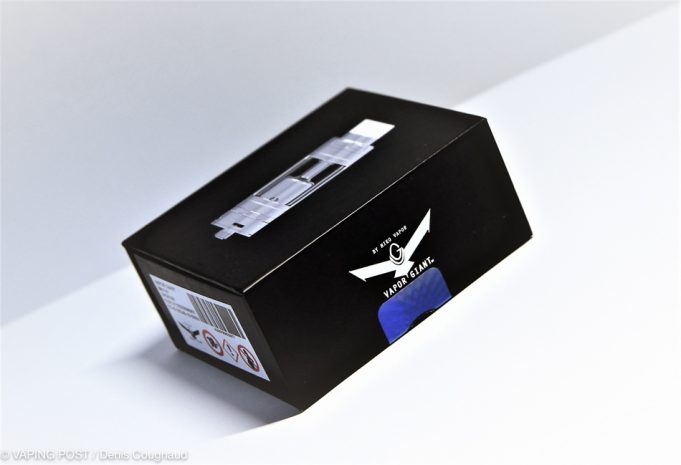 I have had the pleasure to test the Austrian brand with the version 3 of this Vapor Giant Mini.

Mini is Austrian euphemism because compared to other mastodons of the brand, the V4 is everything but mini. It remains in the dimensions of classical RDTAs.

For the record, Vapor Giant is manufactured by Nico Vapor, an Austrian modder who is strongly inspired by Taifun for the inner mechanism. It is the reason why I will compare it to one of the best atomizers of mine, Taifun GT3, that recently granted a 5/5. The main asset of the Vapor Giant is its price that sets it between classical and high-end products. When considered its finish, this is a real performance. What made the originality of the Vapor Giant V3 compared to the Taifun is unfortunately vanishing with the release of the version 4. It fails exactly where the former version was creating a smart gap with the GT2 while remaining cheaper. At that time, Vapor Giant and Taifun were two distinct products with their own identities.

What I have in hands, now, with the Vapor Giant is a well finished atomizer in stainless steel with an attractive design. It is more attractive than the Taifun GT2 but this good feeling only stands for esthetic criteria. For about € 100 (10 more than V3), the V4 is a beautiful atomizer that won’t make a mark on vapers’ minds, in my opinion. It is likely to miss its target and to loose its identity by sticking too much to the competitor, GT3, without reaching its goal. This is the sad truth and my deepest regret. The Finish is excellent, the mounting is easy, the filling, by the top, is very efficient but the Vapor Giant V4 suffers from a number of faults that darken the nice picture I could have made of this atomizer. The visual aspect is a success but the design of its large drip-tip in Delrin is more debatable. Under its cloud-making appearance, it doesn’t keep promises. That said, I am not fond of big clouds but I have to admit that with such a massive trip-tip, you could expect better. It could also be compliant for a mount in dual coil to exploit the full capabilities of its airflow system…

The design of the windows and of the tank has been re-thought for a much better visualization of the e-liquid level than on the V3. It is clearer but you should better keep in mind that this configuration makes it more fragile in case of shock from the sides. It is a major aspect of its identity that the Vapor Giant Mini V4 is loosing here since its illustrious ancestors demonstrated their robustness in every occasions. With only one tank included in the back, I would recommend users to be very careful.

An optional tank in PMMA permits to recover this robustness with a better visibility. I confess that I declined the Pyrex tank to keep the PMMA one that is far from altering the overall design of this atomizer. But the truth about my preference for the PMMA tank is elsewhere and will be unveiled further down. Niko Vapor should definitely leave the choice of the tank up to the user, at purchase, if they cannot include both in their offer. The ring located between the airflow system and the tank is lightly notched and continues to rotate despite the tank is completely screwed on. Opposite to the GT3 where rotating the drip-tip locks the liquid inlets, the Vapor Giant V4 requires rotating the tank.

On paper, the concept is smart but at use it is not that efficient. With time, the tank is screwed more and more on the box or the tube and becomes hard to unscrew. Even worst, if you are not careful about the position of your hand, you may also lock the top cap and prevent any further filling. I had to use pliers to unlock mine, on day. During my first try, instead of unscrewing the top cap, I unscrewed the part just below it which secures the Pyrex tank on the base. As a result, the liquid spread out on my desk. Manipulating the Vapor Giant Mini V4 requires a bit of training!

I noticed that the PMMA tank fits flush to the e-liquid windows in the position open, when it is screwed completely. You just have to unscrew it a little bit to lock liquid inlets and fill up the tank.

Materials are of very good quality and the manufacturer announces they used 1.4301 Steel of alimentary grade.

A nice look but a design that doesn’t keep promises at use, especially for top filling

Usual caution is to avoid getting nervous when manipulation a rebellious RDTA.

The deck is wide enough not to restrain too much the choice of wire or coil diameter. But the e-liquid inlet is uneven and requires to user to be an expert in wicking. The version 3 was so simple that it is hard to believe how version 4 became so fussy and requires so much dexterity.

The diameter of the chimney’s base and the large drip-tip allow thinking that any kind of resistance will fit in it, especially low resistances that are doing well with the very aerial airflow. Unfortunately, even if the dimensions are there to make it generous, a capricious liquid supply blurs the game and won’t avoid you to experience dry hits. Even wide open, the liquid doesn’t climb fast enough to ensure the wick remains wet all the time. An this is not without trying different types of wicking or different mountings. The space between the tank and the bell is too small and the small gutters, like the GT3, is here more useless than anything else. Liquid inlets are too high, in my opinion, compared to the base of the atomizer.

While the liquid inlet of the GT3 is sometimes too generous, that of the Vapor Giant V4 is oppositely too stingy. It unfortunately doesn’t allow the user to correct the issue other than by using a resistance of higher value and a lighter wick, not too packed in the gutters. The true reason for using the PMMA tank is that the space is a bit wider between the tank and the bell, providing a better supply of liquid to the inlets. It is a useful backup solution that works well with resistance coil down to 0.7 Ω. But let’s agree that it is million kilometres away from the versatility of the GT3.

Finally, to conclude with this quest of the best coil to mount in this atomizer, you will have to heigthen a little bit the coil from the air inlets to avoid any dry hits. With this technique, I haven’t had any issue with resistance coils between 0.5 and 0.7 Ω.

The atomizer becomes too aerial compared to the resistance values that allow e-liquid to be supplied fast enough. To be straightforward, the V4 turns undernourished if you ask it too much. A shame!

After switching to PMMA, a band-aid solution is offered with an air reducer for the chimney

To fix the problem of a too aerial vaping style, Vapor Giant and Pipeline propose a pin to reduce the air supply in the base of the atomizer.

It is obviously tighter, almost as tight as a FeV V3, for example. Again, this makes it loose some of its initial assets. Even if vaping becomes agreeable with all these modifications, there are much more performant models for the rendering of flavors and the simplicity of use, for example the Flash e-Vapor. I have been very frustrated with this atomizer, well built by the way, but that offers subohm capabilities without offering corresponding supply of liquid. Hence, to be convenient, you have to change the tank AND adapt the inner diameter of the chimney. A bit too much, isn’t it?

When considering this, it is easy to look in the direction of the GT3. It is definitely more expensive but also much more simple to use and it is precisely the reason why I believe that the Vapor Giant Mini V2 is not there to last.

After you ensured the two liquid windows are closed, you can unscrew the top cap to get access to the holes. Filling the 4.5 ml of liquid looks simple, on paper, but it is not as easy as with the GT3.

Be cautious not to touch the top cap after each refill and at each opening of the windows, it will remain operational. If not, you might lock it down.

An airflow system with three openings, adjustable, improved and easier to operate compared to the former version The airflow system is well designed, not very noisy and quite easy to tune. Besides the possibility to change the size of the airflow to fit to your own vaping style, Vapor Giant Mini V4 is initially very aerial without being generous enough with e-liquid. The rendering of flavors is not best compared to the GT3 that is, here again, much better.

Lastly, I did not notice any leakage over the tree weeks I used it for this test.

Rating of 3.5/5. The version 4 of the famous Vapor Giant Mini is below my expectations and what its predecessors did. Given the money to add to update it, it is worth buying a Taifun GT3, easier to use, more performant and tasty. Beyond these considerations, its design is a success.