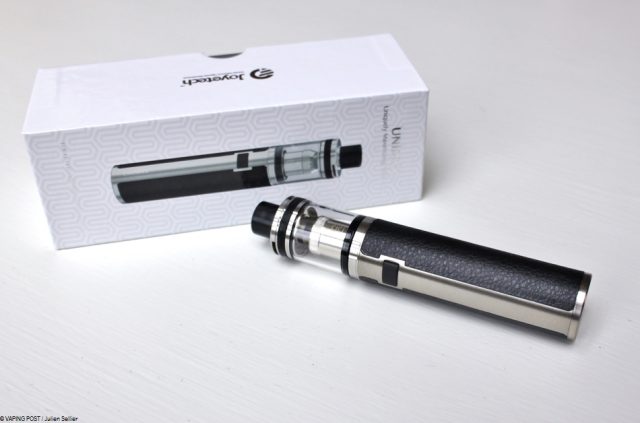 Although the Box models are very popular nowadays, the tubular e-cigarettes are still very appreciated by some vapers for their comfortable grip and their compactness. The kit Unimax 25 combines a built-in battery of 3 000 mAh and a clearomizer Unimax. The format is large: 25.9 mm in diameter for a length of 134.5 mm and a weight of 156 g. It is then a massive object that might discourage beginners, which is not a bad thing since they are not exactly the target of the Unimax 25. On the battery, there is a micro USB plug to charge and a Fire switch. Unimax 25 can charge while vaping thanks to a Passthrough mode. The chipset offers two different vaping modes, direct output and constant output, but without offering the choice of adjusting the output voltage, unfortunately. Nothing special to note regarding the operation of the Unimax 25: five clicks on the Fire switch to switch it on, five clicks to switch it off and when you press it, it works. The transition between constant output and direct output requires to first switch off the Unimax 25 and, second, to press until the LED blinks. When it blinks white, direct output is selected, orange is for the constant output mode. The battery level is inversely proportional to the pace of the LED when you press the Fire switch: down to 60%, nothing happens, below this value the beat increases with draining the battery.

The main feature of Joyetech’s Unimax 25 are: The Unimax clearomizer offers a comfortable capacity of 5 ml, a luxury in this post-TPD era. The top filling system is easy to use, it only requires to unscrew the airflow ring located on the top cap. Two large holes surrounding the chimney accept any type of pipette. Classical. To change the resistance, you have to grab the ring located under the airflow, to unscrew the heating element and to screw a new one. The drip-tip, in Delrin, is wide (12 mm internal diameter) and proprietary, unfortunately, but very pleasant to use.

A clearomizer of good quality The Unimax adopts Joyetech’s Top Filling & Top Airflow (TFTA) anti-leakage system that is self-explanatory. This airflow system works perfectly well, the airflow can be adjusted precisely by the rotation of the top cap. It can be reduced completely. Wide open, the clearomizer is very aerial and the airflow is not restricted at all. It comes with two Kanthal BFL series resistances in 0.5 Ω, dedicated to DL inhalation between 20 W and 40 W. Good news, Joyetech fixed the issue of agglutination which also prevents at the same time spits of juice in mouth. Even with the thickest liquids, no dry hit occurred.

The clearomizer comes fully equipped with a spare Pyrex tank,  a bunch of spare O-rings, and a vape band to protect it in case of shock. Joyetech also provides a second sticker to choose the colour of the battery.

Resistances not suited to the use

At use, the 3 000 mAh are comfortable and provide the Unimax 25 with a very correct autonomy. It is very simple to operate even if it is frustrating the fact that the output voltage is not adjustable. The clearomizer is excellent, easy to use, it doesn’t leak or seep. The volume of vapor is satisfying but like also noticed with the kit Unimax 22, the rendering of flavors is not commensurate with technical specificities. The large air inlets are diluting the flavors and a better feeling is obtained by almost closing the airflows. The vapor remains cold (a good point with fruity liquids) and becomes warmer when restricting the airflow, which is regrettable for the fans of gourmet juices.

By curiosity, I tested the Unimax 25 clearomizer with a 38 W electronic mod – in the constant output mod, Unimax 25’s ceiling is 28 W – and noticed a much better feeling. I strongly believe that a resistance coil lower than 0.5 Ω could help fix the issue. Mr Joyetech, did you pick the idea?

Rating 3.5/5. Well finished, easy to use and well equipped, Joyetech’s kit Unimax 25, like the kit Unimax 22, is impaired by the lack of coherence between a resistance too high and an airflow too aerial. The result is a good volume of vapor but a much lower gustatory quality, too diluted, which spoils the enjoyment of vaping. The Unimax 25 kit would also benefit from the release of 0.2 or 0.3 Ω resistances in the BFL series to enhance the coherence of the setup and could gain one point in this test.

Atomizer 0
High-quality MTL Vaping with a Kayfun atomizer, means choosing an ultra-accurate vape that reveals finely detailed flavours. The vape is recognisable by the flavour rendering...

Review 0
A DL kit that delivers The Rhea X uses a single 18650 battery. This is topped with the new Huracan clearomizer, designed for DL. Capable...