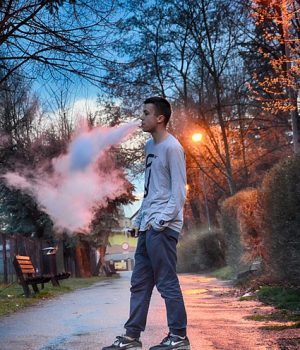 Like many smokers, Dr Attila Danko, a medical doctor from Australia started smoking at the tender age of 11. Also like other smokers, he struggled to quit and when he managed to finally successfully do so via nicotine-containing vaping products, he became an advocate of the harm reduction tools.

Along with other citizen advocates, Danko runs the New Nicotine Alliance Australia, an organization which strives to achieve “a mature public and organisational understanding of the potential of safer nicotine products for reducing cigarette smoking, including their safety and efficacy.”

Is vaping a gateway to smoking?

Studies have indicated that in places where e-cigarette use has increased, smoking rates have decreased and ultimately vaping rates started decreasing as well.
Down under, the debate on whether e-cigarettes should be legalized, continues to be a heated one. According to an article on 4BC116, a recent report on the topic suggested that  tobacco companies are behind the push for e-cigarettes. “On this reasoning, vaping is presented as being a “gateway” activity. It supposedly leads or prompts consumers towards conventional smoking products,” explained the article. However Dr Attila Danko was quick to point out that this is certainly not the case.

“If it was true that e-cigarettes were a massive gateway to children becoming addicted, I wouldn’t be on the side of legalising it,” pointed out Danko. The medical doctor explained that although e-cigarette use amongst young people has increased, this is mostly on an experimental basis and is not correlated to an increase in smoking within the same age group.

In line with Dr. Danko’s observations, studies from different parts of the world have indicated that in places where e-cigarette use has increased, smoking rates have decreased and ultimately vaping rates started decreasing as well. This indicates not only that vaping is not a gateway to smoking, but also that as research has suggested, vaping is not as addictive as smoking.

How are cigarettes freely sold everywhere, and the safer alternatives banned?

Dr. Attila Danko concluded by pointing out that with all the above in mind and considering the fact that “the Royal College of Physicians, which has to be one of the most authoritative medical bodies in the world”, found that e-cigarettes are at least 95% safer than their combustible counterparts, legalizing them should not even be still a discussion at this point.

“It’s just a no-brainer. Why would you allow the most harmful product to be freely sold everywhere and ban the far safer product?” he rightly questions.