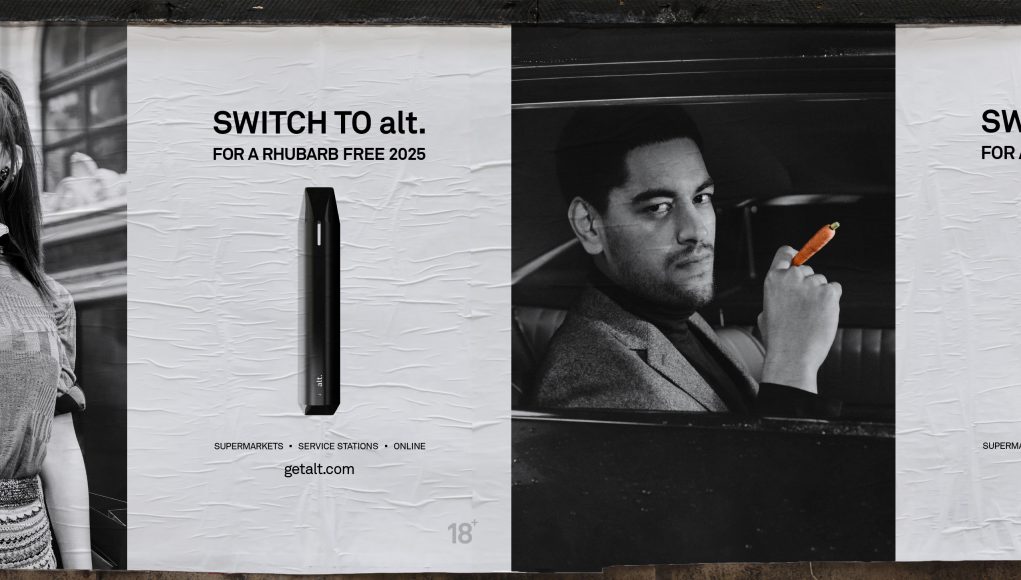 The launch of Alt New Zealand’s campaign is right on the heels of an announcement by Associate Health Minister Jenny Salesa, saying that plans to ban vaping adverts are underway. “The legislation that I’m bringing through in the next few weeks will actually make sure that all of the advertising that is allowed at the moment for vaping, it will no longer be allowed in the very near future,” she said on the AM Show last week.

“What our campaign will highlight is just how ridiculous it is that we can’t show people smoking nor can we make any health claims about vaping despite its effectiveness.”

Aside from this announcement, Alt also finds itself frustrated at the growing number of ads by Big Tobacco companies, who are aggressively promoting their smokeless tobacco devices. Director of Alt New Zealand, Jonathan Devery, said that sadly many people still confuse vaping with smoking, adding that this marketing campaign aims to emphasize the significant difference between the two.

The campaign will include witty televised adverts showing after 8.30pm. “What our campaign will highlight is just how ridiculous it is that we can’t show people smoking nor can we make any health claims about vaping despite its effectiveness. So, tongue in cheek, this campaign replaces people holding cigarettes with people holding a carrot, broccolini, rhubarb, or a banana.”

“While we can’t promote any health benefits around vaping, we absolutely nail smoking for killing 12 Kiwis a day, the black lungs you see on the packets, the skin damage it causes, as well as of course costing many people thousands of dollars a year,” added Devery.

Devery explained that given Big Tobacco’s major investments in their own vaping products and relative marketing campaigns, the campaign also aims to prevent the billion-dollar multinational companies from robbing Kiwi-owned companies like theirs of market share.

“What’s more, Big Tobacco strategically markets in a way that avoids them coming clean with the general public that they’re in fact the owners and drivers of these cute vaping brands. That’s not right,” explained Devery.

Vaping is safer than smoking, and should be regulated as such

Devery and his business partner, Ben Pryor, agree with placing restrictions on vaping marketing similar to the ones placed on alcohol. However, they do not believe that vaping should be treated and regulated as smoking. In line with arguments made by public health experts across the globe, they believe in the importance of differentiating between the two and informing the public about the relative safety of vaping.

“The Government is currently driving a great campaign to encourage New Zealand smokers to switch to vaping. Our latest campaign reinforces that strategy and message, even if we’re forced to be somewhat imaginative. However, the prospect of completely banning all advertising around the most effective tool society currently has to reduce smoking will be completely counterproductive,” says Pryor.

Alt’s marketing campaign will be launched on the 1st of September, and encourages smokers to switch to Alt, pointing out that 40,000 Kiwis have already successfully switched to the popular vaping brand. “We actually believe most Kiwis support advertising restrictions for vaping but not an outright ban. We also believe that clear guidelines for the industry are well overdue.”

“Currently we don’t know where we stand and nor does the public, so no doubt the Advertising Standards Authority (ASA) will get a few emails as a result of our campaign. However, an outright ban would be like taking a sledgehammer to a nut – completely over the top,” says Pryor.

The importance of regulated advertising

“Banning all vaping marketing won’t help reduce our smoking rates. Companies like ours should be able to advertise in a restricted and regulated environment.”

Devery pointed out the importance of being able to advertise in a regulated manner. “Going forward we believe it’s critical to keep informing Kiwis that vaping is an effective tool for smokers to quit and is 95% less harmful than cigarettes. That’s the only way New Zealand will ever get close to achieving its ambition of being a smoke-free country.”

“Banning all vaping marketing won’t help reduce our smoking rates. Companies like ours should be able to advertise in a restricted and regulated environment. We need to be able to target smoking with a healthier alternative, all while protecting young and vulnerable Kiwis and communities,” says Jonathan Devery.

Devery updated the previously made comment about the ASA, pointing out that Alt has not received any public complaints via the agency about their ads yet. “What we do know is that people are not rushing to their phones or computers to lay complaints. Most Kiwis simply don’t have a problem with responsible anti-smoking advertising like ours,” says Jonathan Devery.