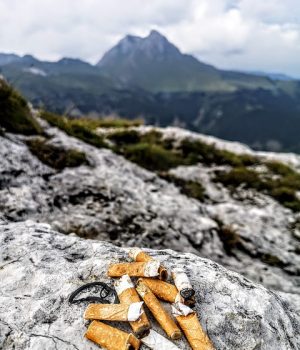 Data indicate that over five trillion butts are generated by smokers each year worldwide. Sadly, many of these tend to pile up in parks, beaches, streets and bus stops, as they are small enough to appear more harmless than the more visible type of rubbish, and are therefore more likely to be disposed of inappropriately.

Dustin Poppendieck, a measurement scientist at the National Institute of Standards and Technology (NIST) together with his team, found that a used butt (one that is already cold to the touch) can in one day give off the equivalent of up to 14% of the nicotine that an actively burning cigarette emits.

“I was absolutely surprised,” said Poppendieck. “The numbers are significant and could have important impacts when butts are disposed of indoors or in cars.” The NIST measurements were performed under an interagency agreement with the FDA, as part of a study aiming to determine the overall impact of cigarette smoking on people’s lives.

Poppendieck’s team measured eight of the hundreds of chemicals typically emitted by cigarettes. Additionally, they measured triacetin, a plasticizer that is often used to give filters their consistency, and makes up as much as 10% of a filter.

“The nicotine coming from a butt over seven days could be comparable to the nicotine emitted from mainstream and sidestream [second- or thirdhand] smoke during active smoking.”Dustin Poppendieck

In this particular study, rather than looking at the effect that smoking has on smokers, Poppendieck and his team considered the impact of filters on by standers and the environment. “If you have ever sat on a park bench when somebody next to you smoked, then they got up and left their cigarette butt behind, that odor you were smelling is indicative of what we are trying to capture and measure,” Poppendieck said. “Anyone with a good sense of smell knows it’s there.”

“The nicotine coming from a butt over seven days could be comparable to the nicotine emitted from mainstream and sidestream [second- or thirdhand] smoke during active smoking,” added Poppendieck.

How Cigarette Butts Affect an Ecosystem

A 2019 study published in Ecotoxicology and Environmental Safety had indicated how cigarette butts can disrupt an ecosystem. Titled, “Cigarette butts have adverse effects on initial growth of perennial ryegrass (gramineae: Lolium perenne L.) and white clover (leguminosae: Trifolium repens L.)” this research had found that the presence of cigarette butts in the soil harms certain plants.

How Cigarette Butts Pollute the Earth