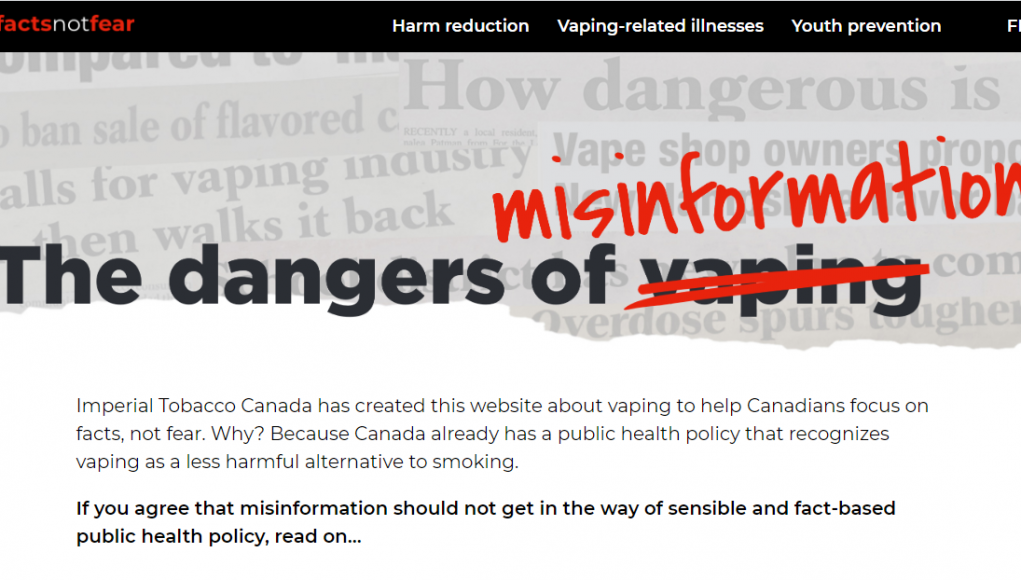 The bold campaign was launched by Imperial Tobacco, which sells Vype vaping products through its parent company, British American Tobacco (BAT), and Health Canada is analysing it closely in order to figure out whether it violates any advertising laws. The federal health minister’s office said, “inspectors are currently reviewing the ad and the associated website.”

Meanwhile, the federal Tobacco and Vaping Products Act makes it illegal to promote the devices “by comparing the health effects arising from the use of the product or from its emissions with those arising from the use of a tobacco product or from its emissions.” The “facts not fear” website seems to violate that part of the act as it states, “Health Canada’s website affirms that ‘Vaping is less harmful than smoking.”

In response to this, Eric Gagnon, head of Corporate and Regulatory Affairs for Imperial Tobacco, said he is certain the campaign is lawful. “Everything we do, from our point of view, is legal,” he said in an interview. “We’ll never do anything illegal. I can assure you that the advertisement, the campaign ahead of publishing looked at every detail, and we consider the advertisement to be legal.”

Meanwhile, since the investigation commenced, Imperial Tobacco seems to have made some modifications to the website. Originally, the site contained a line stating, “Since May 2018, Imperial Tobacco has sold, in Canada, about 100,000 Vype devices.” This statement goes against Quebec anti-tobacco laws, which ban the promotion of brands and tobacco manufacturers.

After originally insisting the Vype name did not appear on the site, the public relations firm associated with Imperial Tobacco later confirmed that the name of the product had been removed.

Meanwhile, a new study published in Frontiers in Communication has indicated that promotional vaping Instagram posts outnumber anti-vaping content, including the FDA awareness campaign hashtag, at 10,000 to 1.

The study titled, “#Vape: Measuring E-Cigarette Influence on Instagram With Deep Learning and Text Analysis,” has shown that the FDA’s “The Real Cost” awareness campaign has had little success in deterring teens from vaping.