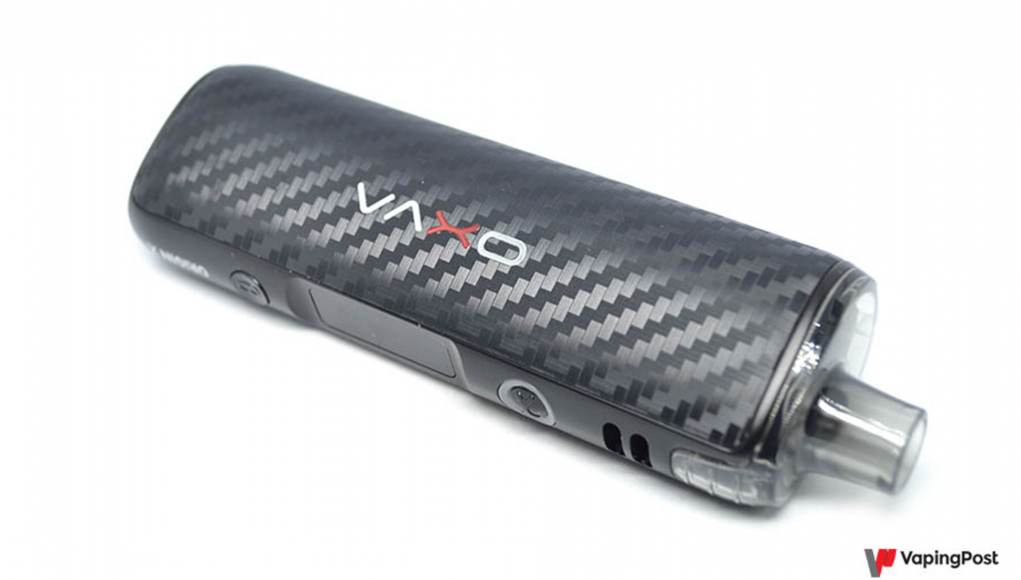 Oxva is a young e-cigarette brand that’s made a real splash with the Origin X. The pod features an 18650 battery and plenty of options to make your experience a treat. The coils on this model are the icing on the cake. 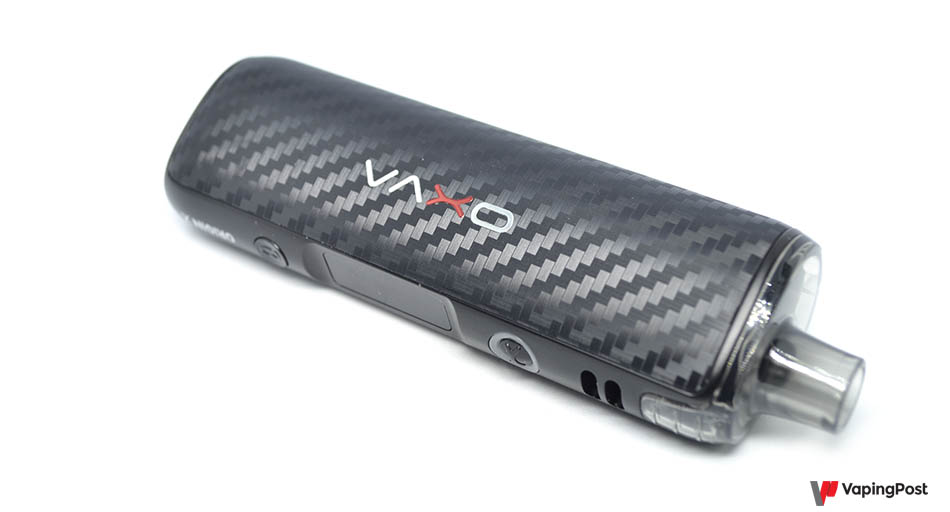 The Origin X is the kid brother of the Origin, which didn’t really shine. But this time, manufacturer Oxva has redesigned the new version from the bottom to the top. The result is a successful product with coils that put it among the best on the pod mod market. 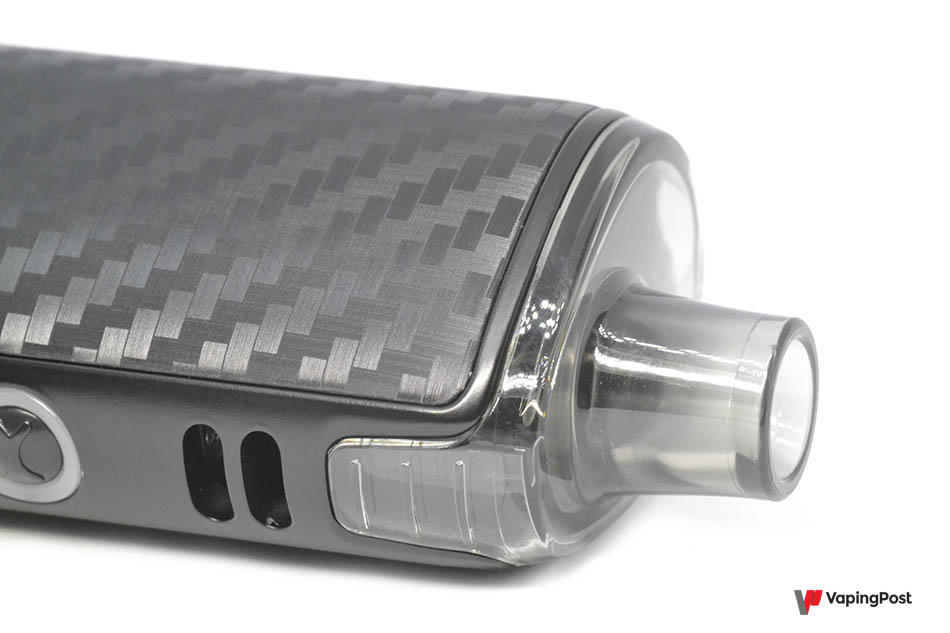 The tank fits into the top of the mod. The cartridge drip tip is moulded. That in itself isn’t uncomfortable in the mouth, but the pod can take different coil styles which might leave some users wishing for a wider opening. So the fixed size is a bit of a shame. One side of the tank is much thicker, which makes for a better draw. But even though it’s transparent, it is hard to see the e-liquid level once the cartridge is fitted. 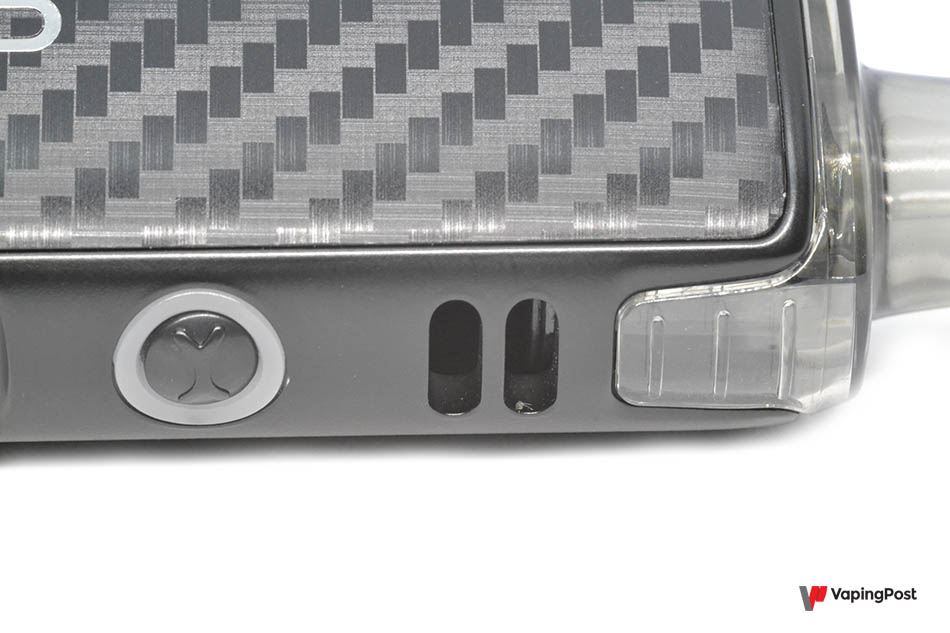 There are two air inlets under the cartridge to cool the coil. They’re fixed and can’t be adjusted. That might sound like a negative but it actually isn’t. The Origin X also has a second airflow system, but more on that later. 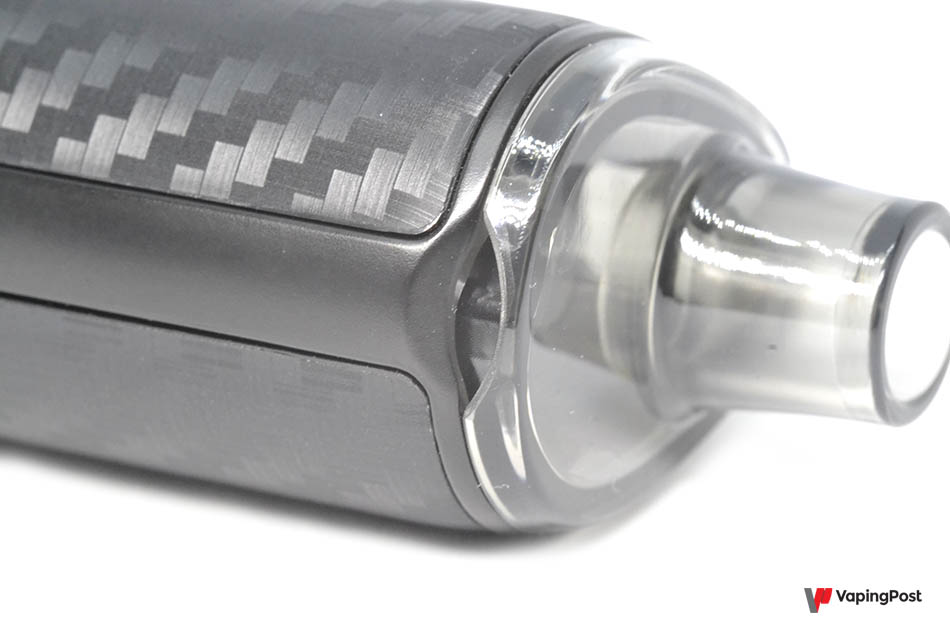 The opposite edge has a small opening which comes in handy when removing the tank. The magnets that hold the cartridge in place are powerful. It’s easier to remove the cartridge by holding it on both sides. It’s simple but we had to think about it. 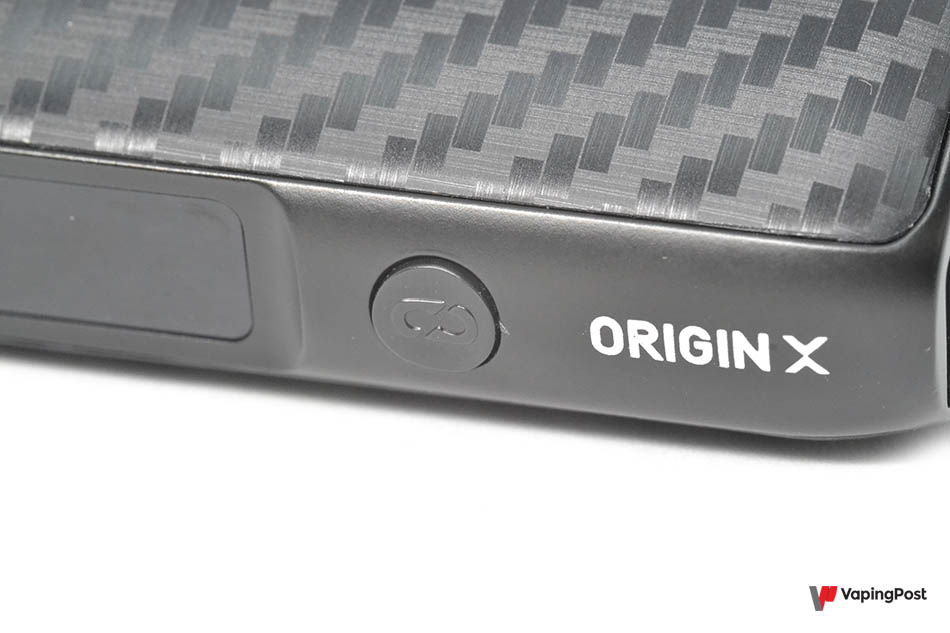 There are only two buttons on the Origin X: a control button and a trigger button. The single power control button works on a 5 to 60 W loop. Holding it down increases the wattage. If you go past the setting you want, you have to keep pressing to get to the end of the cycle and start again from 5 W. This is a bit unusual, as devices nowadays almost always have a “+” and a “-” button. But it goes up quickly, and you do get used to it. It’s not a deal breaker anyway. 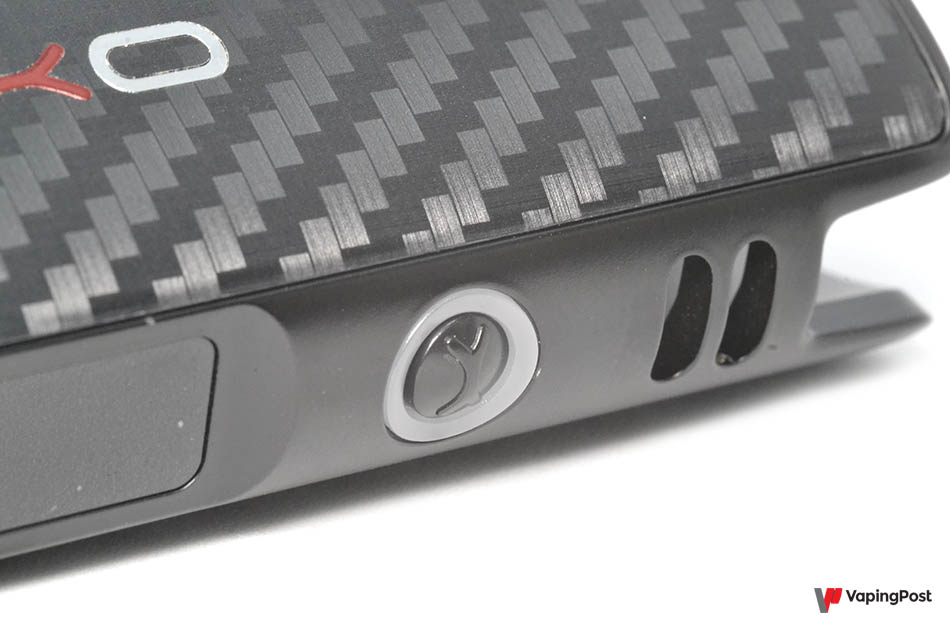 The fire button surround is lit. It’s a bit on the small side and set in a bit too far. But it doesn’t move around and is tight enough. There’s nothing to add really. It’s neat and fits well. 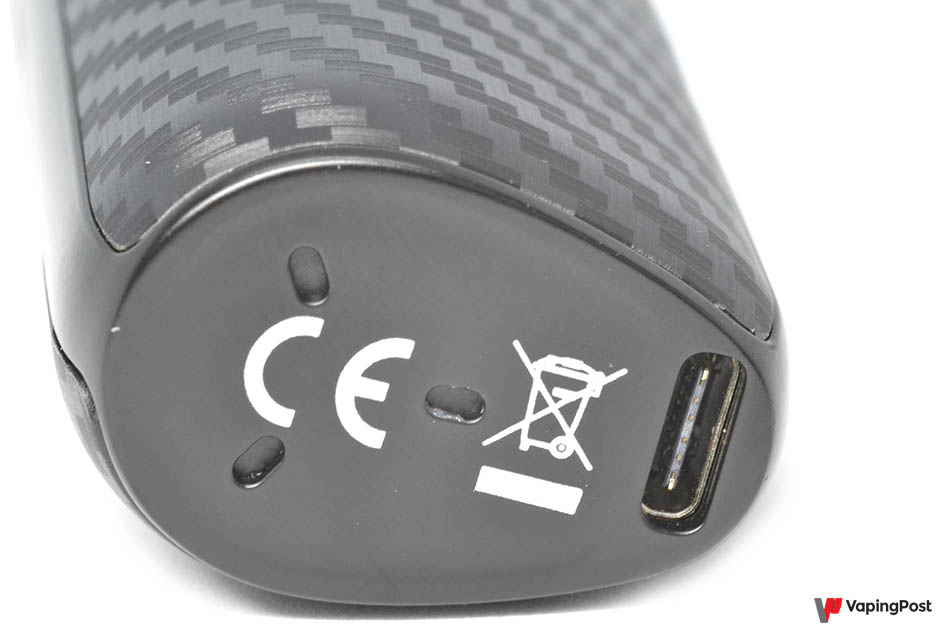 Underneath the mod is the USB C port for any updates or for recharging the battery. There’s no degassing hole under the pod mod, but if you have battery trouble the battery cover isn’t going to last long. 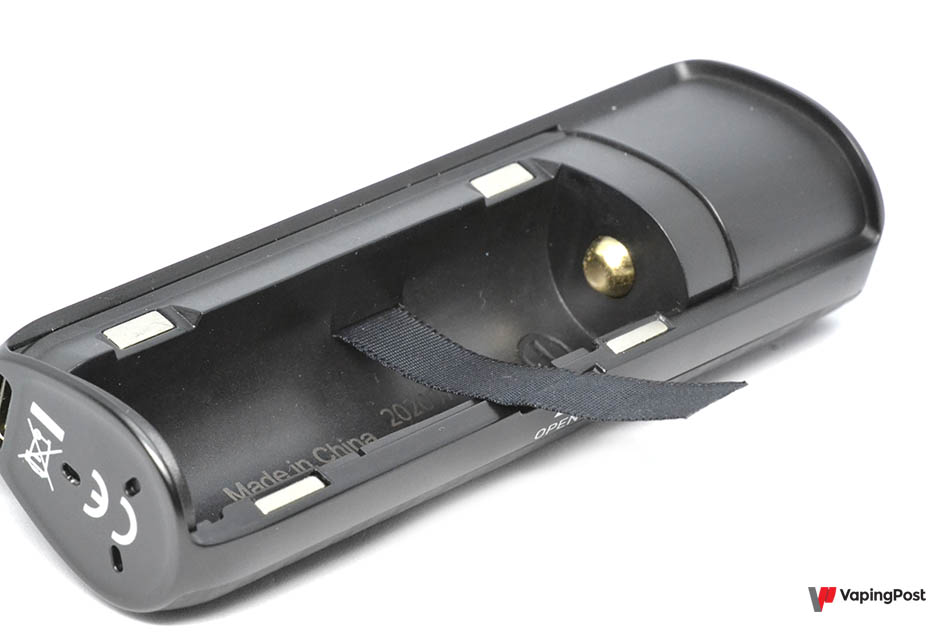 The battery compartment is easy to access. Just remove the cover – held in place by four magnets – and insert the battery. A short ribbon makes it easier to take out again. The polarity is indicated on the inside. 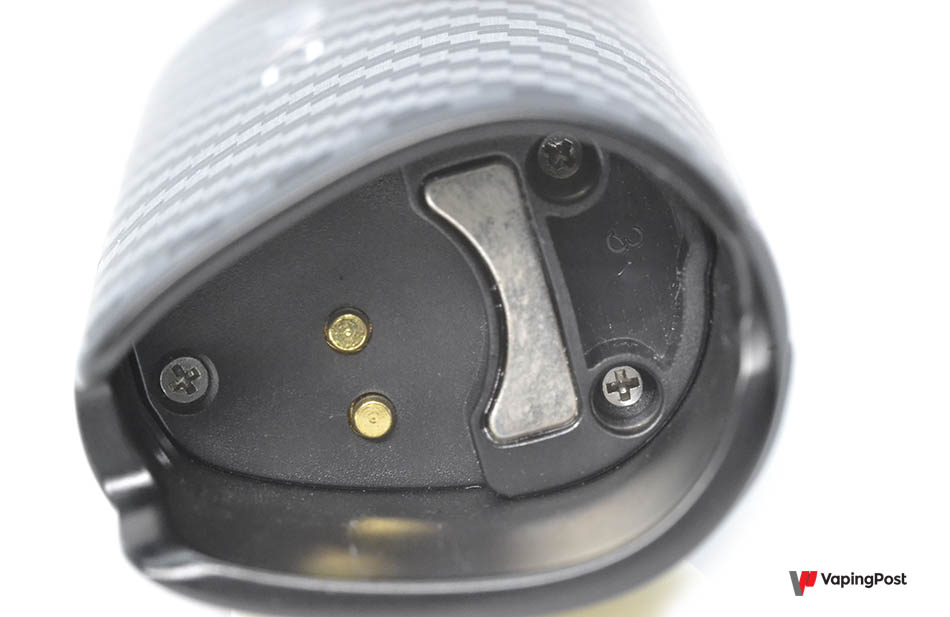 The tank is held onto the top of the mod by a large magnet. The hold is excellent because the magnet’s really powerful which means there’s no risk of the tank coming off. It’s nice and solid, so nothing to complain about here. 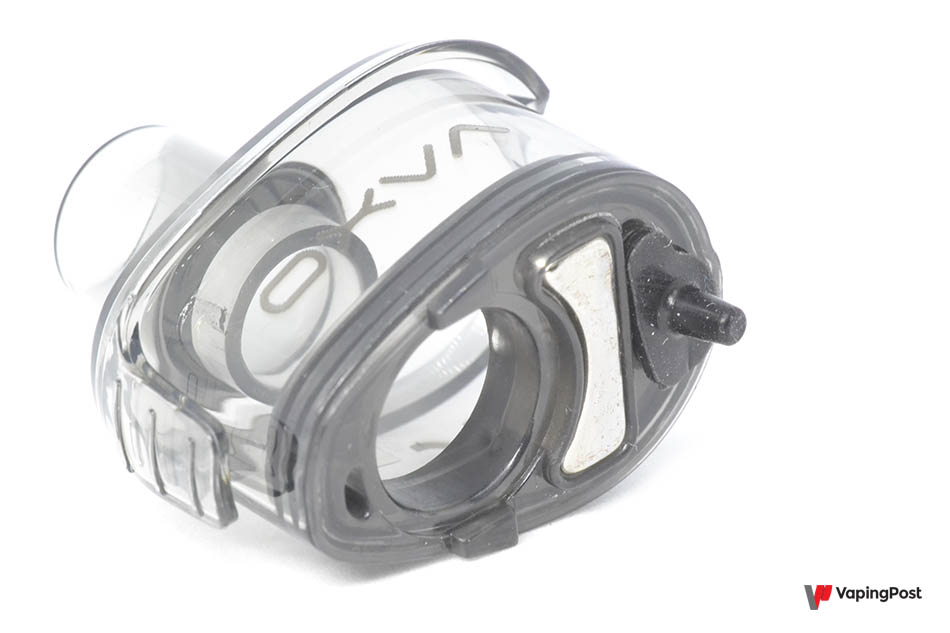 The tank is a standard design. You can insert your resistance coil through a hole underneath. The coil is held in place by a series of seals. The tabs on each side help when fitting the coil and prevent leaks. There’s a small silicone cap to open and seal the filling hole. It’s also situated underneath. This is a bit different from systems located on the side. In the various tests we carried out, it didn’t leak at all. 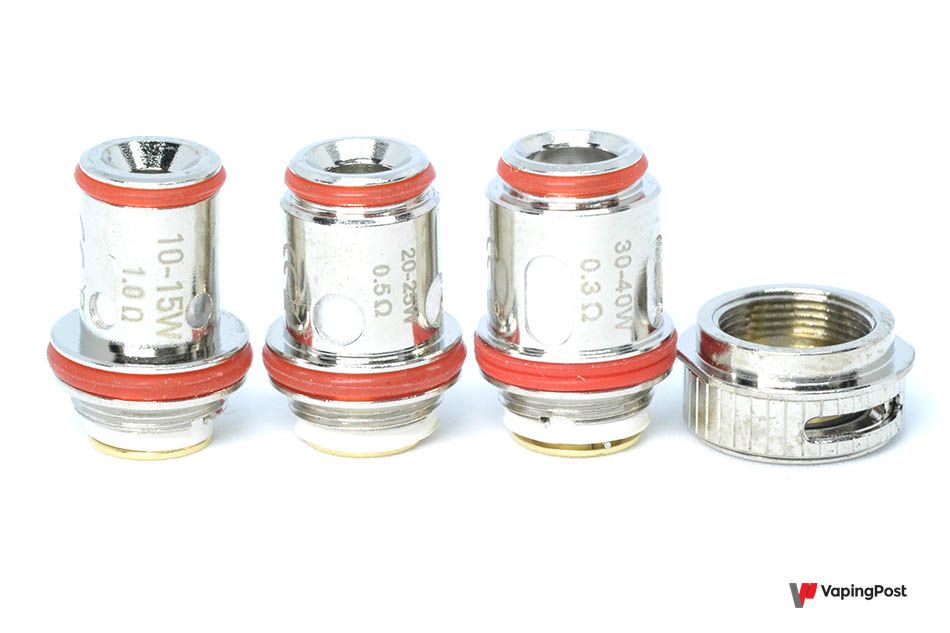 There are three different resistors available for the Origin X, ranging from 0.3 to 1 ohm. These screw onto an adjustable airflow ring. The basic kit comes with the 1 ohm resistor. 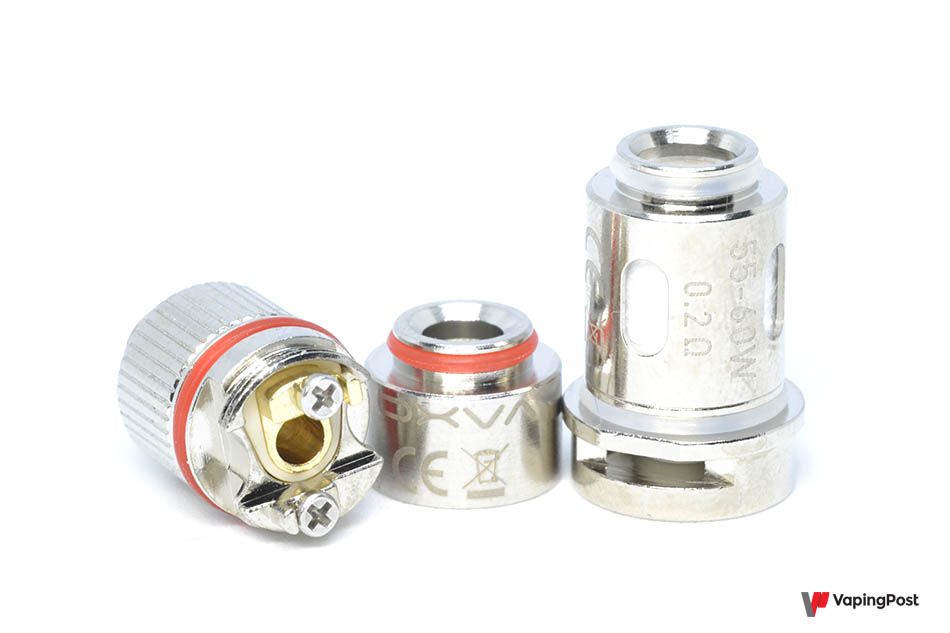 There’s also an RBA deck if you want to fit a different micro coil. A 0.2 ohm coil for 55 to 60 W use comes with the basic kit. This differs from the other models in that it doesn’t have an adjustable airflow ring. 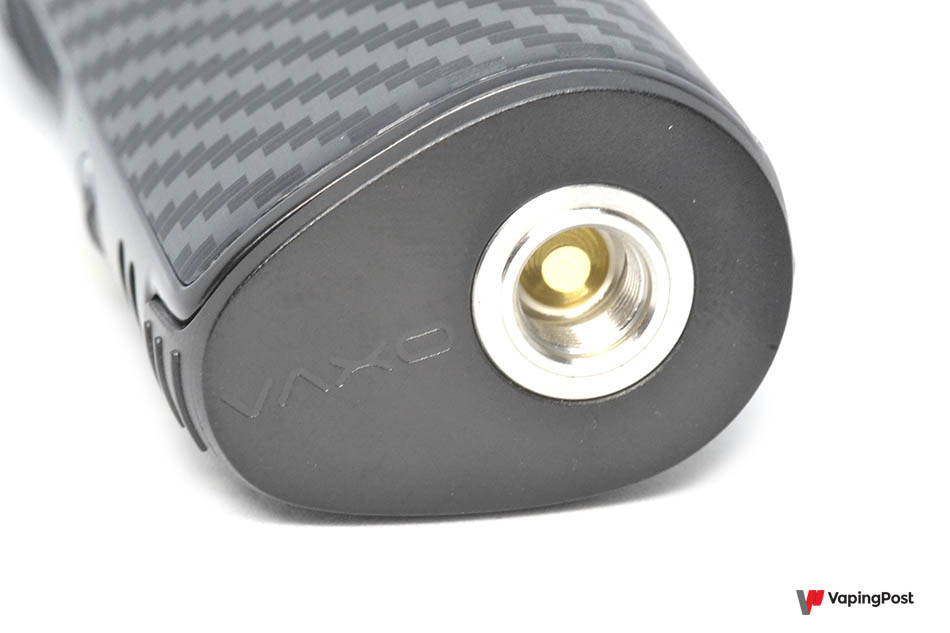 A deck with a 510 connector is also available as an option. That lets you fit the pod mod to any atomizer you want, up to 23 mm. A 24mm atomizer is a bit big but it doesn’t look too bad. 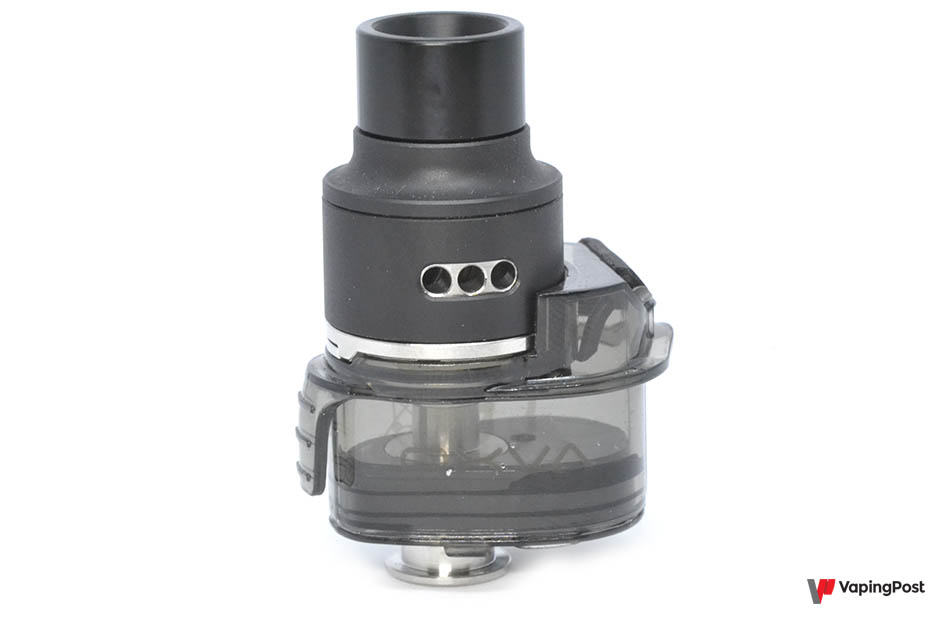 There’s another interesting accessory with this RBA double coil deck. It features an 810 format drip tip and an airflow ring with a series of three holes on each side. This deck comes with its own tank, but can’t be taken apart for the proper clean it might need when you change liquids. It’s a shame. 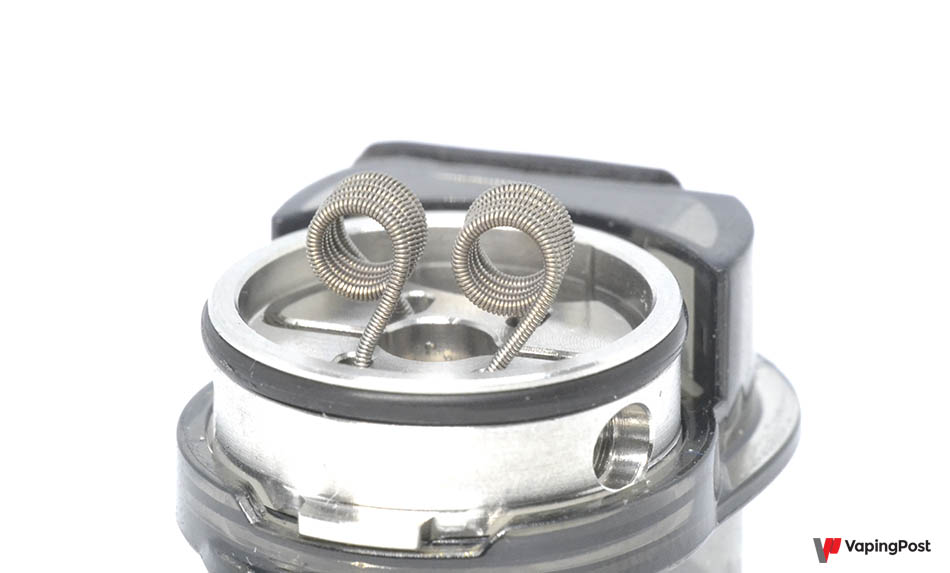 It can easily take two 3 mm coils, there’s plenty of room. The postless deck is easy to access, and has good quality screws. The top cap fits onto the base and is held by a central pin. 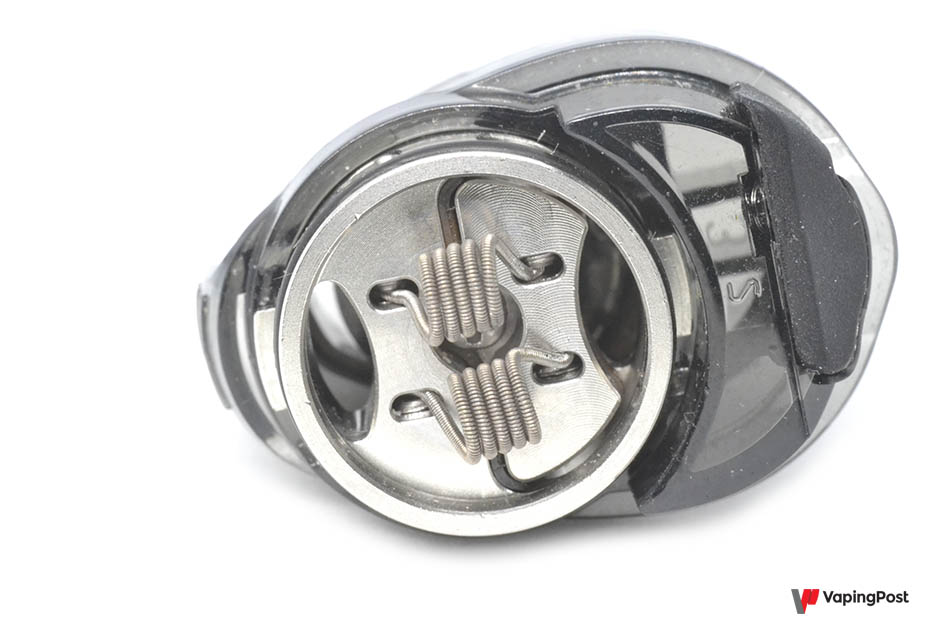 Both sides of the deck have plenty of room for the wick inside the tank. This RBA deck acts like an RTA. The cotton dips down into the tank and wicks up the liquid.

The Oxva gives a great vape. Flavours are really impressive. The 1 ohm coil renders flavours very well. This model gives you a real indirect inhalation vape experience. If you open the airflow all the way, you can vape on a “small” vape with direct inhalation.

The optional 0.3 and 0.5 ohm coils offer an excellent compromise. Use them from 20 to 40 W for a dense, flavourful direct inhalation vape. They don’t use up much liquid or battery power.

The monocoil RBA deck is less interesting, which is often the case with this type of product. Space is limited, the build is not the most comfortable, and there’s barely any benefit.

The 0.2 ohm coil that comes with the kit is perfect for making more vapour. Flavour is as good as ever, but we wish we could adjust the airflow on this model, even though it works fine with the basic set-up. It’s worth noting that taking a lot of quick puffs with this coil tends to heat up the body of the mod. But not enough to become annoying.

For this test, we received a limited edition box set that includes all of the accessories available. But this box, the testing special, includes the first chipset for the model. The RBA double coil deck limits the mod to 40 watts. That’s a shame for a model capable of delivering 60 watts. Actually, one of the chipset’s jobs is to set the right value and a power limit for each accessory. We’ve talked to the manufacturer and they told us that the commercial version won’t be restricted any more. That means you’ll be able to use the double coil deck up to 60 watts. 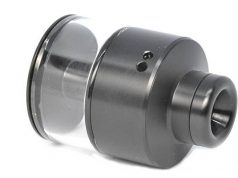 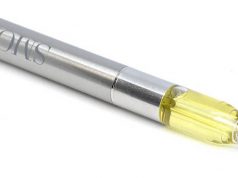 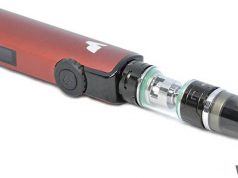