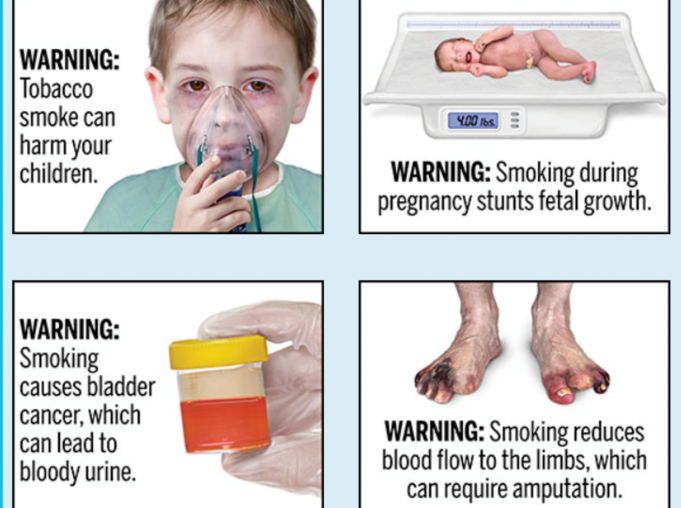 The United States has long been lagging behind other countries with regards to cigarette warnings. In fact, the FDA has not updated cigarette pack warnings for over 30 years, since 1984.

Originally set to go into effect on June 18th, 2021, the FDA had already delayed the effective date’ to October 16, 2021.
Finally, in the summer of 2019, the FDA put forward proposals for new effective graphic health warnings covering at least 50% of the surface area of cigarette packages. The new warnings carry messages such as “Smoking reduces blood flow to the limbs, which can require amputation,” and “Smoking causes bladder cancer, which can lead to bloody urine.”

In total there are 11 warnings, featuring such statements that are accompanied by color graphic images of health conditions caused by smoking. Originally set to go into effect on June 18th, 2021, the FDA had already delayed the ‘effective date’ to October 16, 2021.

This delay was the result of two federal lawsuits filed to halt the process. One of those lawsuits, R.J. Reynolds Tobacco Co. et al. v. United States Food and Drug Administration, filed on April 3, was filed by R.J. Reynolds Tobacco Co., and several manufacturers and retailers in the Eastern District of Texas. The objective of the suit was invalidating the FDA’s rule for these new warnings and Congress’s requirement that the FDA mandate them.

In line with the court’s order, the FDA has announced that it strongly encourages the releveant parties to submit cigarette health warnings’ rotational plans as soon as possible, but no later than March 16, 2021, rather than Dec. 16, 2020, as previously required. In addition, the agency plans to revise its relevant guidance documents related to the graphic cigarette health warning regulations with the new effective dates.

IQOS 3 Approved By The FDA