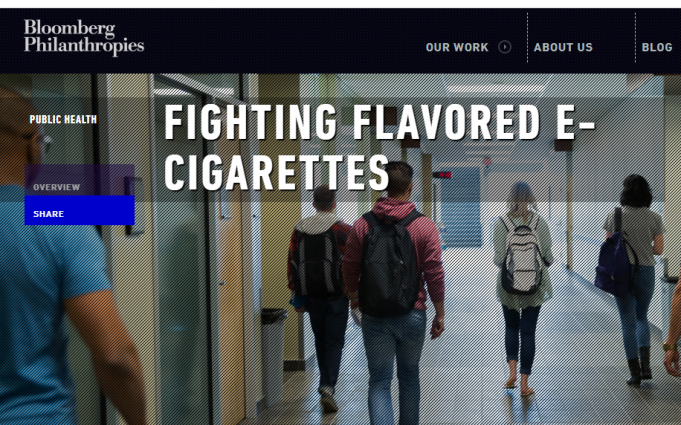 In theory the WHO FCTC recognizes harm reduction as a core tobacco control policy, yet it fails to implement it
The phenomenon was brought to the forefront by the recent Bloomberg case, when two members of the Philippine House of Representatives were forced to suspend public consultations on vaping and heated tobacco products, due to the Philippines FDA accepting a grant from the Union and Bloomberg Initiative.

These charities have developed policies with a “western mind set”

Executive Coordinator of CAPHRA, Nancy Loucas, said that these charities, funded by some of the world’s richest billionaires, developed their own policies against vaping with a “western mind set” and were trying to prescribe such policies on low and middle-income countries (LMICs), particularly in Asia and the Pacific.

“In the current environment, there is a lot of philanthropic colonialism. This is a term for people who have a lot of money and use it to help people in LMICs and then turn around and control their policymaking,” said Loucas in an interview with Canada-based Christopher Balkaran, the creator of the Strong and Free Podcast. “And a lot of people who rely on funding from private foundations will do whatever they need to do in order to maintain that revenue stream.”

Why Western-minded policies are ineffective in Asian countries

Loucas explained that the problem with the tobacco control measures pushed by the World Health Organization (WHO) and massive private foundations like the aforementioned, is that they were specifically designed for wealthy countries such as the United States, which have strong health care systems and resources.

“Low and middle-income countries don’t have resources to provide smoking cessation programs for people who smoke. That is the number one reason. Number 2, in some of these countries, governments are actually involved in the manufacture and production of tobacco. So it does not really serve their purpose to have people stop smoking,” she said.

Loucas also said smoking cessation programs anchored on the quit-or-die approach have done little to reduce the smoking epidemic in the world, as there are still 1.1 billion smokers today.  She explained that this is because cigarettes became very addictive starting in the 1980s when tobacco companies put additives and chemicals in their products.

“In their bid to lower tar and nicotine, they added chemicals. In the process, they made the nicotine that is naturally occurring in tobacco more powerful, more addictive and more potent. It’s all the other stuff that’s in it that made it harder for a lot of us to stop,” she said.

She said this is why most smokers cannot not just quit and have been ready to spend their last money on cigarettes, instead of food. Unfortunately, the WHO and some private foundations do not understand the problem and have been insisting on their ineffective methods. “It is very hard for them to understand because they never experienced it,” she said.

“What a lot of tobacco controllers don’t understand or process is when you are living hand to mouth like that, and you are living with the effects of colonialism and racism, there is a lot of stress involved with that. One of the things that nicotine does for people is that it can calm them down. It is a break from their everyday stress.  That is why a lot of people still smoke. It is their comfort mechanism,” added Loucas.

She highlighted that tobacco harm reduction is effective, as it helps people continue to manage their stress through nicotine consumption without the harm caused by the combustion of cigarettes. “If they can get the same chemical which is nicotine in a safer delivery method, that should be a good thing. It is not the nicotine that is the problem, it is the combustion. But a lot of people demonized nicotine.”

The WHO Framework Convention on Tobacco Control

Loucas went on to refer to the infamous WHO Framework Convention on Tobacco Control (FCTC) which in theory recognizes harm reduction as a core tobacco control policy, yet fails to implement it. “The Framework Convention is not only about the control of tobacco but also about the reduction of harm caused by tobacco use. A lot of governments focus on the first part of the article and kind of disregard the second part,” she said.

“The whole point of Framework Convention is to minimize the harm of tobacco on people’s health. But you’ve got a group of people out there who think that the less harmful alternatives is a threat,” she said.