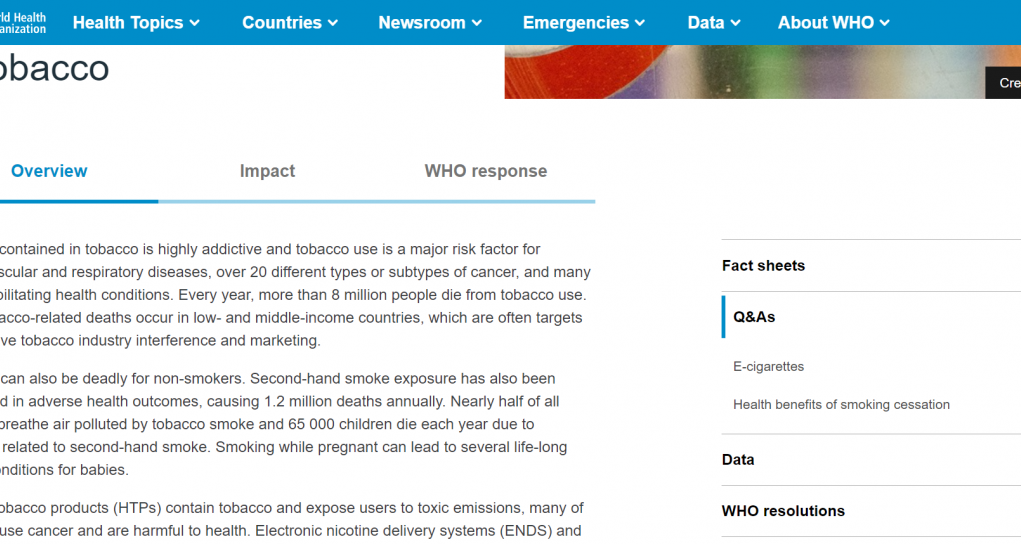 Facebook
Twitter
Pinterest
WhatsApp
A key question that the WHO poses is: ‘Are e-cigarettes more or less dangerous than conventional tobacco cigarettes?’ Given all the science indicating the relative safety of vapes the WHO should have unequivocally answered this with ‘less’, but it did not.
Executive Coordinator of CAPHRA, Nancy Loucas, revealed that sadly the only accurate information in the Q and A section is the explanation of what the acronym ENDS stands for: Electronic Nicotine Delivery Systems. The rest, she highlights, consists of claims that have been proven inaccurate by science.

A key question that the WHO poses is: ‘Are e-cigarettes more or less dangerous than conventional tobacco cigarettes?’ CAPHRA highlights that given all the science indicating the relative safety of vapes, the WHO should have unequivocally answered this with ‘less’. However, it puts vaping and smoking on the same shelf, declaring that ‘both tobacco products and ENDS pose risks to health, and that the safest option is using neither.

“If you were a smoker desperate to quit reading this Q&A, you’d likely stay smoking. WHO refuses to differentiate between vaping and smoking. At best it completely deflects from answering what are very simple and straight-forward questions. More so, it delivers lie after lie,” said Loucas.

“The fact that WHO even poses a question about whether vaping is more or less dangerous than smoking is a disgrace. Rather than giving a straight one worded answer, WHO refuses to acknowledge international science that has repeatedly confirmed vaping is considerably less harmful than smoking,” she added.

Meanwhile, a new study launched at the ninth edition of Global Forum on Nicotine (#GFN22) indicated once again that the implementation of the WHO’s tobacco control measures known as MPOWER, were not in any way associated with lower levels of tobacco-related mortality rates in Europe. On the other hand, independent research also shared at the event, revealed that switching from smoking to Swedish-style snus, is proving to be an effective strategy to reduce the harms caused by tobacco.