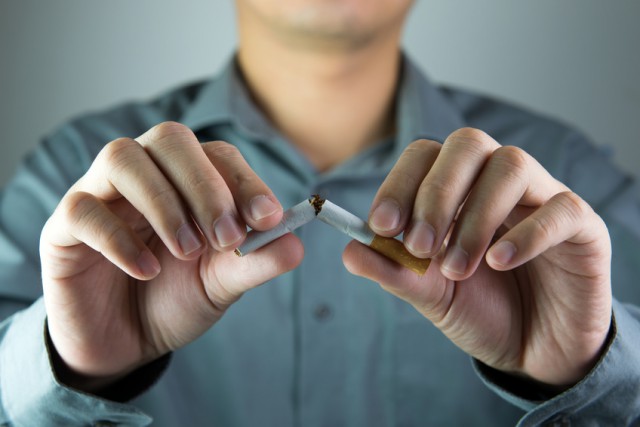 Opposite to the most common belief, going slowly is not the best way to quit smoking, even if quitting rates are also reasonably good for slow quitters. However, the recent study [1] by Dr Nicola Lindson-Hawley and co-authors from the Universities of Oxford, of Birmingham and from the University College London, demonstrates that abrupt smoking cessation “is more likely to lead to lasting abstinence”.

The study was carried out in England on 697 adult smokers with tobacco addiction (smoking more than 15 cigarettes per day). All volunteers were asked to schedule a quitting date 15 days ahead and received behavioral counseling and nicotine patches and nicotine replacement therapy (NRT) products (like gum, lozenges and mouth spray).

Half of the group was randomly assigned to smoke freely until their quit date, then to stop abruptly; the others were asked to gradually reduce their smoking over the two weeks before stopping. The researchers measured abstinence success by looking at their smoking status for four weeks and then six months later.

49.0% of the abrupt quitters were successful within the first month and 22.0% were still smoke-free after half a year. In contrast 15.5% of the gradual group were smoke-free at the long-term horizon, 39.2% after one month.

A Cochrane review [2] of randomized, controlled trials about abrupt and gradual smoking cessation attempts by the same authors concluded in an equal success between the two methods. The present result represents a significant step in smoking cessation counselling since the authors have been “unable to draw conclusions about the difference in adverse events between [behavioral] interventions, however recent studies suggest that pre-quit NRT does not increase adverse events”.

“Even if people wanted to quit gradually, they were more likely to quit if they used the abrupt method,” -N. Lindson-Hawley
“A lot of people think that the common sense way to give up smoking is to reduce the amount they smoke before quitting,” says Nicola Lindson-Hawley to Time Magazine. More people said they preferred to quit gradually rather than abruptly. The +25% abstinence after abrupt cessation compared to a gradual reduction calls into question whether clinicians should encourage gradual reduction before a quit date in smokers who are ready to quit, a practice that is advised by smoking cessation guidelines.

Behavioral interventions and pharmacotherapies including NRTs significantly improve abstinence for smokers who clearly demonstrated their will to quit smoking. Among smokers not intending to quit, the use of e-cigarettes, with or without nicotine, decreased cigarette consumption and elicited enduring tobacco abstinence without causing significant side effects, according to the Italian ECLAT study.

It is regrettable that the recognition by the British Health Agency of the e-cigarette as an aid to smoking cessation came 5 to 6 years too late to be part of the protocol proposal [3]. Shall the author include the e-cigarette in the NRT package offered to the future volunteers of their surveys and investigate their performance in cessation studies?

In his blog, Prof S. Glantz however anticipates on Lindson-Hawley’s future scientific conclusions, and explains why, in support of his recent controverted meta-analysis in The Lancet, the e-cigarettes are associated to lower quitting rates. According to his back-of-the-envelop comment, he suggests that it is because e-cigarettes are “generally used as part of a taper down strategy” that lower quitting rates were found for smokers who choose this NRT method. An easy short-cut that remains to be scientifically demonstrated.

S. Glantz is also the one who used the term “cold turkey” that, in public’s mind suggests a painful process during which quitters are not assisted by any counselling or medication.

During a guided tour of the vaporizer’s market, Dr Jacques Le Houezec, public health consultant specialized in smoking addiction, provides useful advises for cutting down with smoking. He does not recommend a taper down strategy or dual use of e-cigarettes and tobacco to gain success in smoking withdrawal. He provides useful tips for quitters who failed with other NRTs and decide to try the e-cigarette.