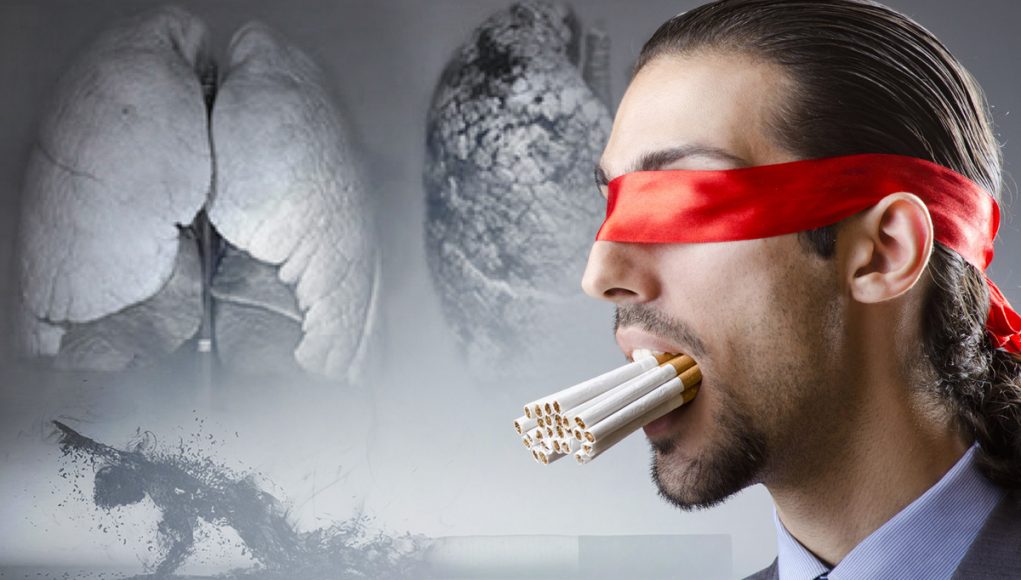 Associate Professor Simone Dennis from the Australian National University (ANU) has, for a long time now, been looking at the effects, or rather, the lack of effect of graphic warnings on cigarette packets. Her work has been published in a book, “Smokefree,” which documents the experience of smokers in Australia since the introduction of measures supposedly ‘designed to curb the habit.’

The headline in one paper reads, Smoking Causes Blindness, but in actual fact, the truth really is that the inverse is the case – it is blindness causing smoking. (I will explain)

The media reports of her findings, though very interesting, are not in the slightest surprising, and, I am afraid, are not really all that relevant. They do however confirm that earlier investigations into the psychology which lies behind resistance to graphic warnings is not without real substance.

My comment above, it should be stressed, is not to disparage the work of Simone Dennis, but to highlight that it may well be that the media has, once again, failed in its duty to identify and report on that which is important with regard to smoking, and quitting smoking. What I am about to write about may be, or may not be part of the content of the book: But it should be and it most certainly should be the headline news in the media reports.

By the 1960’s there is even more reason for Public Health not to have embarked on scare campaigns, and by the 1970’s, they had no excuse for their ignorance whatsoever. And worse still, one of the leading – and another Australian – advocates for warnings and horrific graphics on cigarette packs is the one person, above all others, who should have known they would not work – Indeed, did he know that, and, is the knowledge that they would be ineffective the very reason he promoted them? Let me explain…

As far back as 1953, psychologists were looking at the effect of fear in advertising. The results of their investigations were not as you or I would expect.  The model which was being presented at that time was known as, “The Drive Model.” Part of this model argues that, … when individuals are presented with threatening information they will be motivated to search for responses that reduce the threat. When a response reduces fear, it is reinforced and becomes part of one’s permanent response repertory.

The drive model therefore suggests that higher fear should result in more persuasion, but only if the recommended action is perceived as effective in averting danger. (Janis, I. L., & Feshbach, S. (1953): Effects of Fear-Arousing Communications. Journal of Abnormal and Social Psychology, 48, 78–92)

Take a close look at the end of the quote, “…but only if the recommended action is perceived as averting danger.” This is a theme which was continued as the decades rolled by.

And no matter the adjustment and changes that have taken place since 1953, one element at least has remained constant: That warnings and threat will be ineffective if no practical, no realistic alternative is offered.

It is assumed that when faced with a threat, fear will follow. This, it is assumed, will result in an action to avoid the threat. And this is the logic SEEMINGLY being followed by advocates of warnings and graphic images on cigarette packs. They say that the fear induced by the images and warnings will encourage people to stop, or, never start smoking.

A too far away threat

Take the two groups, the old and the young, and you should note a very different response to warnings and horrific images, neither of them positive, neither effectively combatting cigarette smoking, and indeed, in the case of young people, actively tempting them to try cigarettes – and some people at the top of Tobacco Control were and are aware of it – of this I am sure.

What happens when a young smoker, or would be smoker, sees a horrific image on a cigarette pack? The answer, as far as avoiding cigarettes, is nothing very much at all. Why? The image does not induce fear. Why?  The threat event is too far away. It is, to the mind of a young person, very remote – it can be ignored. Perhaps this explains why horrific images are being found to be so ineffective. Perhaps this is why the uptake of cigarette smoking among the young remains so high. A month is a lifetime to many youngsters, so how long is ten or twenty, how long is thirty or forty years away? How far away is, ‘if at all?’

And with established smokers the effect is different but with a similar result Take note that “…the more one is defensively resisting a recommendation the less one is making appropriate changes in line with the message’s recommendations.” And, “…that messages that fail to make people believe the recommended response is effective and/or that they are able to perform the recommended response produce stronger fear control/defensive response.”

Do I hear an echo reaching me from 1953… listen carefully, does it say, wait for it “…but only if the recommended action is perceived as effective in averting danger?”

So what is the recommended action? Oh! Stop smoking! Or (according to the CDC) chew a carrot, or just as effectively try NRT with a 93% failure rate. That is correct: Not realistic, not something to be perceived as effective in averting danger. So other mechanisms kick in.

This is 2016 and the headlines in the Australian press are only now screaming that someone has just discovered that the ‘punters’ are resisting the messages about the dangers of smoking… Get a grip!

But why am I saying that I think that some in Tobacco Control have always known this?

Tobacco Control is expert at marketing. It, I believe, knows the psychology involved inside and out. Whole university departments give ‘expert’ advice on a continuous level. Why, even one prominent Tobacco Control Advocate, I am informed, has a PhD in the subject of advertising and smoking.

They must have known right from the start that the measures they were recommending would only have a limited effect and still they press on having created a society of zealots who will follow them blindly. They condemn the only realistic alternative to smoking –

And today one can truly say that Tobacco Control’s blindness is causing smoking.

In fact, I think the morbid curiosity these picture create in adolescents looking for any challenge will kill those cats.
Showing off these pittoresque boxes serves two purposes: Impress their peers with their death defying daring and agitate the ossified killjoys.
No wonder youth smoking rates have risen again in OZ since introduction of these ads.