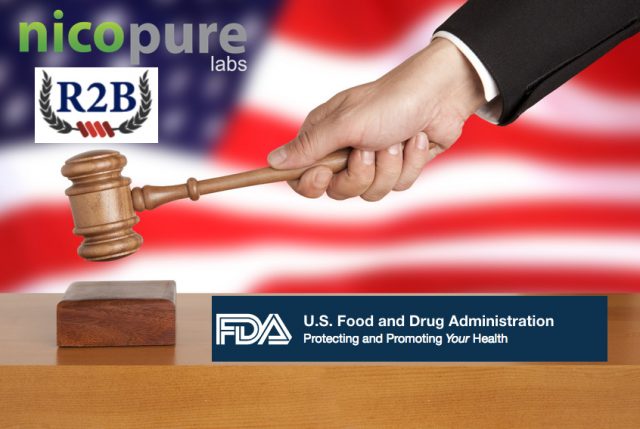 The District Court of Washington D.C. gave the FDA until August 16 to respond to the lawsuits for the lawsuit filed by Nicopure Labs. A lawsuit that is now consolidated with The Right to be Smoke-Free Coalition’s actions, according to the Court. A hearing is scheduled for October 19, 2016 (10:00 a.m.).

In this case, Judge Amy Berman Jackson will play a key role. She requested the legal action to be joined by another lawsuit filed in June by with The Right to be Smoke-Free coalition, among which CASAA, SFATA, NOTBlowingSmoke.org and SEVIA-USA. The Court want to consolidate the two cases filed in the same Federal Court and hear plaintiffs at the same time, certainly for the sake of brevity.

While Nicopure Labs’ motion for summary judgment has been filed by July 8, 2016, the Right to Be Smoke-Free coalition motion is expected before July 25, 2016.

Other cases filed by Lost Arts Liquids LLC, John Middleton Co. LLC (subsidiary from Altria), Enrique Fernando Sanchez Icaza and Global Premium Cigars, LLC or the Alabama retailers over the FDA regulations will not be included in the newly consolidated lawsuit because they have not been filed in the same Federal Court.

Jeff Stamler, CEO and co-founder of Nicopure Labs declared “We strongly believe that this rule violates the Constitution and the process by which it was put into effect is fundamentally flawed and not legally grounded”. Nicopure Labs is requesting that the court affirm that the Deeming Rule is unlawful and should be set aside. He continued “Further, we object to the vaping industry being subjected to greater restrictions than traditional tobacco companies, with which Nicopure Labs has no affiliation. We trust that the U.S. District Court will see the merit of our arguments.”

The outcome of the Judge Jackson’s ruling over the FDA is susceptible to set a legal precedent for all future court decisions, especially for the cases lawsuits filed by the companies cited above.

As a reminder, the plaintiffs put into question FDA’s jurisdiction: