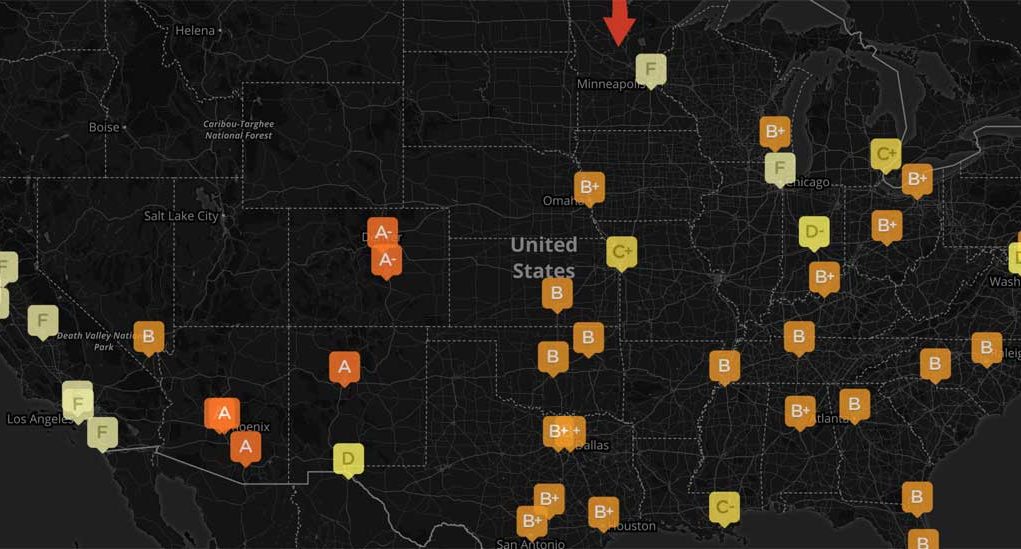 Researchers from think tank R Street Institute have created Vapescore.org, an interactive database which rank 52 U.S. cities on their friendliness to vaping. “While laws regulating alternatives to tobacco cigarettes are nothing new, the rapid expansion of the vapor marketplace creates a real opportunity to reduce harms traditionally associated with smoking tobacco.” state the researchers.

The best cities for vaping

– Virginia Beach, VA – the city has no tax on liquid nicotine and no statewide vaping bans. E-cigarettes are banned on public transportation whilst all other public establishments are free to implement their own rules.

–Tucson, AZ – Here we find no regulations in relation to e-cigarette use, and currently no taxes on the products however they are being discussed.

–Chicago, IL – Vaping is banned wherever combustible cigarettes are and there is an 80 cent tax on vaping units and a 75 cent tax per milliliter of nicotine fluid.

–Boston, MA – In this city, vaping is treated like smoking cigarettes and banned wherever smoking is, even in vape shops. Although there is currently no tax on the products, several local policy makers want to tax the products as cigarettes.

–Minneapolis, MN– Vape products are taxed at a significant 95 percent of their wholesale price, and shockingly e-liquids are taxed a higher rate than cigarettes. Vaping here is also banned wherever smoking is.

The dangers of regulating vaping as smoking

While a study released by Public Health England in the UK has found that vaping is at least 95% safer than vaping, and has hence led to the country fully endorsing the products as smoking cessation aids. In the US, the Food and Drug Administration, (FDA), has condemned the products and regulated them as tobacco products (even though they contain no tobacco, and in some cases no nicotine), as from last August.

As this motion is being played out, it is having detrimental effects on the small vaping businesses, causing many small vape shops to close down, hence allowing the big tobacco companies to thrive once again. However the biggest concern are the industry’s consumers, the vapers who were using the products to quit smoking. Some of these who are living in these cities or states that have adopted very harsh regulations, are being forced back into smoking, or to obtain the products from the black market, where they are unregulated and possibly unsafe.

“Rather than arbitrarily and unscientifically drawing the conclusion that cigarettes and vapor products are equivalent, public officials should consider policies treat vapor products proportionally to their health impacts.”Cameron Smith and Dan Semelsberger ,researchers from R Street Institute

“Our first Vapescore analysis reveals a rapidly developing policy area rife with misinformation and heavily motivated by a political desire to replace declining cigarette revenues,” researchers Cameron Smith and Dan Semelsberger wrote in the report, concluding “Rather than arbitrarily and unscientifically drawing the conclusion that cigarettes and vapor products are equivalent, public officials should consider policies treat vapor products proportionally to their health impacts.”