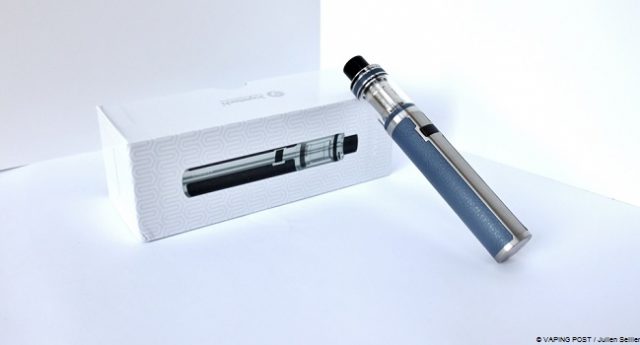 A tube for clouds Even if Box Mods invaded the shelves in vape shops, the tubular e-cigarettes are still praised by many vapers, mostly beginners. This format offers a pleasant grip and a compact format. In addition, the format also reminds cigarettes and may facilitate smokers’ transition to vaping. Joyetech’s kit Unimax 22 is composed of a 2 200 mAh built-in battery associated to the atomizer Unimax. The external diameter is 22 mm and compatible with many of the atomizers on the market. Length is 134.5 mm and weight doesn’t exceed 126 g. This kit is then in the average of tubular mods, relatively compact, and could be a best choice for newcomers if the vaping style was not so aerial because of the clearomizer’s specificities.

The kit comes with many accessories and parts. On finds two BFL series Kanthal coils in 0.5 Ω, a spare Pyrex tank, a USB cable, many O-rings and two leather-like stickers to put on the battery to change the appearance.

Simple, robust and with a good autonomy

The battery part presents a micro-USB plug to charge, a Fire switch and a degassing hole at the bottom. The design looks robust, the fire switch doesn’t jiggle and is soft under the fingers. At use, the Unimax battery is very easy: 5 clicks to switch on, 5 clicks to switch off, one click to vape. To select the constant to direct output mode, you first have to switch the device off and to hold the switch until the LED turns white for “direct” or orange for “constant”. Battery level is given by the pace of the LED after pressing the Fire switch, the fastest, le lowest the battery.

The technical features of Joyetech’s Unimax 22 are: The clearomizer Unimax 22 only has a capacity of 2 ml, which is limited to such an aerial device. To fill up, just unscrew the upper airflow ring on the top cap and drip the juice in one of the two holes. All classical and simple.

To change the resistance coil, then unscrew the ring placed under the airflow ring and unscrew the resistance to replace it by a new one. The drip-tip, in Delrin, is large (12 mm internal diameter). It is unfortunately proprietary and agreeable to use.

A clearomizer of good quality The clearomizer comes fully equipped with a Pyrex tank and a spare one, and with a pocket full of spare O-rings. It also comes with a vape band to protect the tank from shocks.

Unimax adopts Joyetech’s anti-leakage system called Top Filling & Top Airflow (TFTA) which indicates that both the airflow and refill systems are from the top. The TFTA has proven efficiency during this test without leakage or seepage. The airflow system is operated by rotation of the top cap. It can be set from very tight to wide open but the original setting is naturally aerial, which gives, open at 25%, something already very aerial. In consequence, the rendering of flavors is then drastically affected with a vapor that becomes diluted very fast. It is sold with two BFL series Kanthal coils of 0.5 Ω for DL inhalation. It is recommended for use between 20 W and 40 W. With this clearomizer, Joyetech has fixed the agglutination and e-liquid projection issue met with the eGo AIO. Even with the thickest liquids, no dry hit occurred.

The vapor is present but not the taste 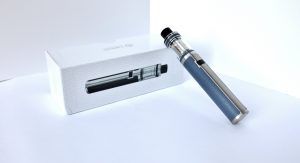 The 2 200 mAh of the Unimax are far enough to vape all day long. Its use is very simple, its clearomizer excellent with a complete absence of leackage or seepage. The volume of vapor is satisfactory but the rendering of flavors is not there. To become tasty, the airflow system needs to be closed almost completely. The vapor remains cool (a good point for fruity liquids) and warms up while closing the airflow, which is regrettable for those how love gourmet flavors.

By curiosity, I tested the Unimax 22 clearomizer with a 38 W electronic mod – in the constant output mod, Unimax 22’s ceiling is 28 W – and noticed a much better feeling. I strongly believe that a resistance coil lower than 0.5 Ω could help fix the issue. Mr Joyetech, did you pick the idea?

Rating 3.5/5. Good finish, satisfying battery autonomy and well equipped, Joyetech’s kit Unimax 22 is impaired by the lack of coherence between a resistance too high and an airflow too aerial. The result is a good volume of vapor but a much lower gustatory quality, too diluted, which spoils the enjoyment of vaping. The Unimax 22 kit would benefit of 0.2 or 0.3 Ω resistances in the BFL series to enhance the coherence of the setup and gain one point in this test.

Review 0
A compact kit with a long battery life which lacks flavour The Drag E60 is compact and perfectly made. Its built-in 2550 mAh battery offers...

Pod 0
Simply practical Under its minimalist design, the Xros 3 has all the essential features of a pod designed both for beginners and more experienced vapers....