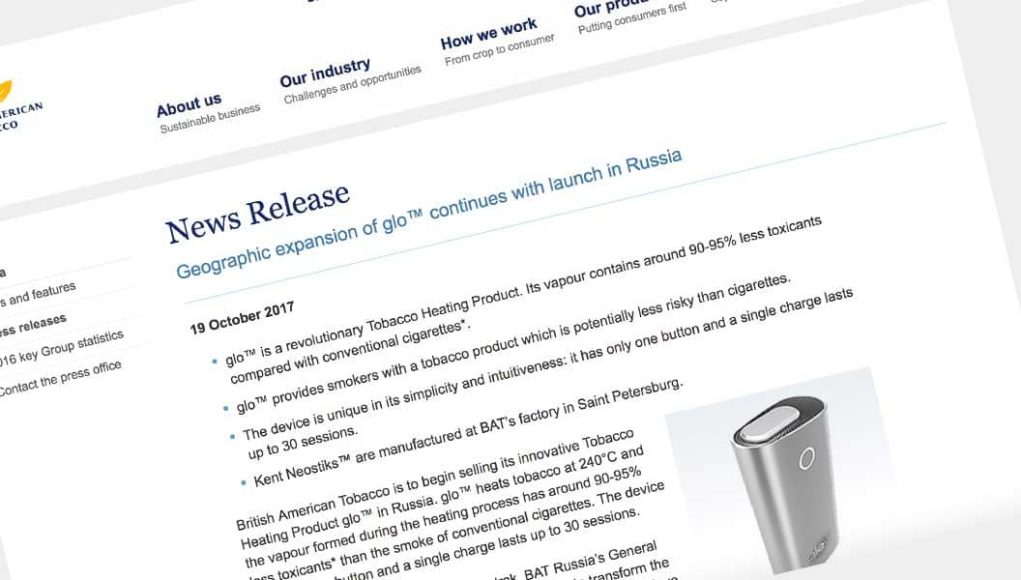 Glo, a direct competitor of PMI’s iQOS, is currently available in Canada, Japan, South Korea and Switzerland, making the Russian market the fifth in which its launched. Both Glo and iQOS, are battery operated smokeless alternatives to combustible cigarettes and work by heating sticks containing tobacco leaves. These refills which look like short cigarettes, must be inserted into the devices and are heated up once the devices are turned on.

Glo is marketed as simpler and more practical to use than iQOS. Rather than consisting of a separate cigarette holder that is inserted into the charger after smoking each stick, Glo consists of just one device that can power more than twenty sticks with a full charge.

Glo is marketed as simpler to use than iQOS, as rather than consisting of a separate cigarette holder that is inserted each time, Glo consists of just one device that can power more than twenty sticks with a full charge.
“It’s one touch, one button. It’s got a very easy-to-understand user interface. It’s easy to clean. Lastly, it’s very easy to carry,” said Hamish Norrie, the marketing director of BAT Korea when the product was launched in South Korea last August.

A study released last June by renowned anti-smoking expert, Dr. Konstantinos Farsalinos, suggested that the nicotine levels produced by the HnB products were significantly higher than those produced by the first generation cig-a-like e-cigarettes.

Russia has been receptive to low risk products

David Sweanor, an adjunct law professor at the University of Ottawa and the author of several e-cigarette studies, said that in Japan, where HnB products have had unparallel success, smoking rates have been on a steep decline.

“The heat-not-burn products have led to Japan currently having the most rapid decline in cigarette smoking that we have ever seen in a developed market,” said Sweanor. “Russia is a huge market that has shown receptivity to low-risk products, so BAT is being astute rather than becoming the next Kodak … Tobacco companies have no choice, they either ride this wave or get crushed by it,” he added.