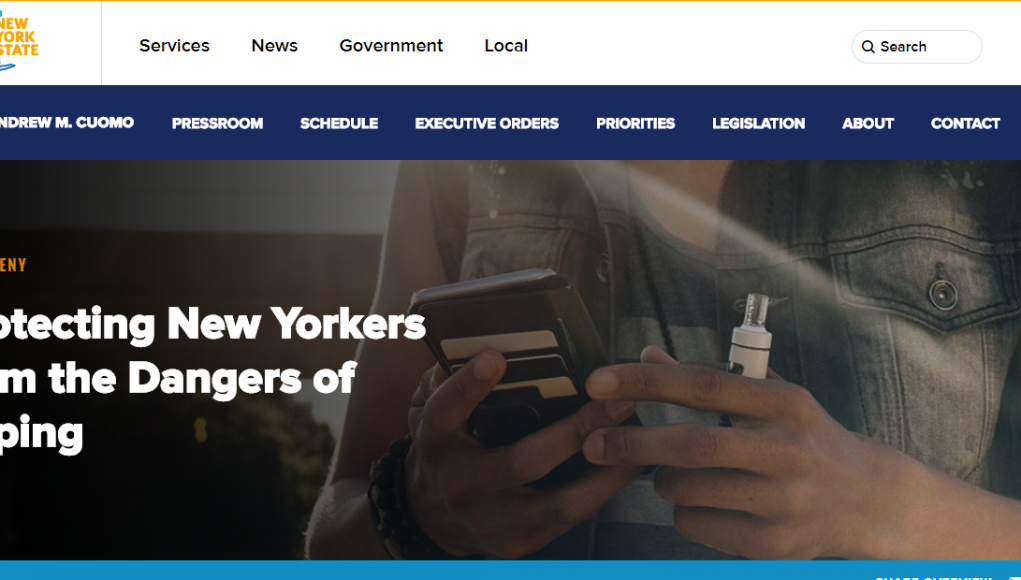 “Vaping is a public health crisis, claiming too many lives and making countless others sick in a short period of time,” Cuomo said in the release. “The problem is made worse by unscrupulous vaping companies who are targeting young people with candy-flavored products, like cotton candy and bubblegum and other marketing ploys.”

The last part of Cuomo’s four-part proposal would restrict online vape sales, which the governor’s office said allows minors to illegally purchase e-liquids and e-cigarettes. The legislation would rightly permit only licensed vape retailers to sell the products online or via phone or mail order.

Accusing the vaping industry of replacing the tobacco industry

Subsequently, the Governor has launched a new hashtag #NoVapeNY, a petition and a new website all aimed at encouraging New Yorkers to support the new measure. “The dangers of vaping and flavored e-cigarette products are becoming more apparent by the day, and it would be a tragedy if our successful efforts to combat the tobacco industry were reversed by allowing the vaping industry to get a whole new generation hooked on their products,” he said.

“This is a scourge on our state and our nation: if these chemicals don’t kill you, you wind up addicted to nicotine. New York is leading the nation in confronting this new and deadly epidemic, and this year we will continue to lead by banning flavored e-cigarette products and vaping ads aimed at youth, helping to keep our children safe and preventing them from forming unhealthy and life-long addictions,” added Cuomo.

Besides taking action to ban flavours, the Governor has also directed the New York State Department of Health to investigate companies that produce vape liquids. Additionally vape shops are required to put up warnings advising customers of any risks derived from purchasing unregulated products and the State Police and DOH have been advised to ramp up enforcement efforts against retailers who sell to underage customers.