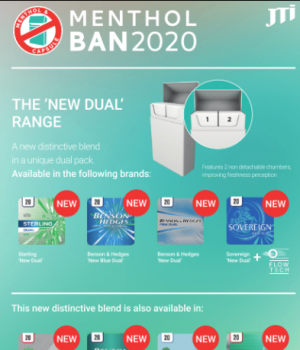 “No person may produce or supply a cigarette or hand rolling tobacco with a filter, paper, package, capsule or other component containing flavourings; a filter, paper or capsule containing tobacco or nicotine; or a technical feature allowing the consumer to modify the smell, taste, or smoke intensity of the product,” explained UK-based Action on Smoking and Health (ASH).

However despite the ban, JTI has introduced a replacement range called “New Dual” across its Benson & Hedges, Mayfair and Silk Cut products, which reportedly still contains menthol. To this effect, the UK Government has launched an investigation. The PHE is “in the process of writing to Japan Tobacco International to find out more information” said a source as quoted by an article in Inews. “We will decide on next steps depending on the outcome of that investigation.”

“JTI’s new ranges of product variants with similar names to their menthol cigarettes have been promoted under a ‘menthol reimagined’ logo. Not surprisingly, retailers have reported that this confuses smokers.”Dr Rosemary Hiscock, The Tobacco Control Research Group, University of Bath

Dr Rosemary Hiscock, of the Tobacco Control Research Group at the University of Bath, said that this move was required. “We welcome the news that PHE is pursuing this matter. JTI’s new ranges of product variants with similar names to their menthol cigarettes have been promoted under a ‘menthol reimagined’ logo. Not surprisingly, retailers have reported that this confuses smokers.”

Action on Smoking and Health (ASH) chief executive Deborah Arnott, believes that the investigation should be taken a step further. “During the Brexit transition period the UK still has access to the EU’s Independent Advisory Panel, which has been set up to determine whether or not tobacco products are in breach of the rules on flavours. Writing to the company to ask for more information is a waste of time, the UK should be referring these products to the independent panel for assessment without further delay.”