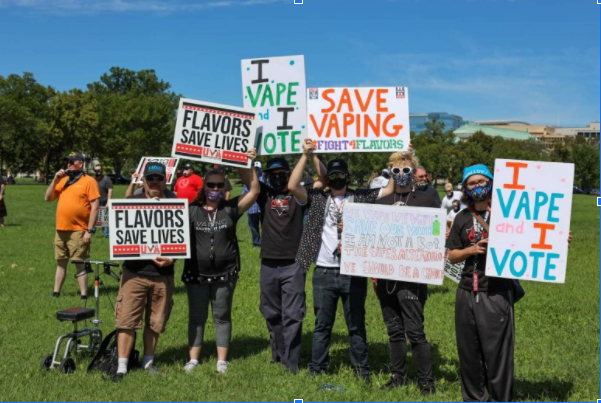 The Family Smoking Prevention & Tobacco Control Act requires that all tobacco products must receive a PreMarket Tobacco Application (PMTA) authorization before they can be sold across the U.S..Initially set for May 12th, as the deadline was approaching, a number of entities including Altria Group Inc. and tobacco association NATO, had asked the FDA to push the deadline back due to the complications caused by the coronavirus pandemic.

To this effect, on March 30th the agency filed a request for a 120-day extension on the deadline, and on April 3rd, Judge Paul Grimm of the United States District Court for the District of Maryland agreed to the request, moving the deadline to September 9th, 2020.

Sadly however, the PMTA regulatory process was clearly only designed for product manufacturers who can afford the time and financial costs that come with it, leaving the smaller business in ruins. Approximately 14,000 small vape businesses are estimated to be forced to close down as a result, leaving over 160,000 Americans unemployed.

The UVA asks for an FDA reform 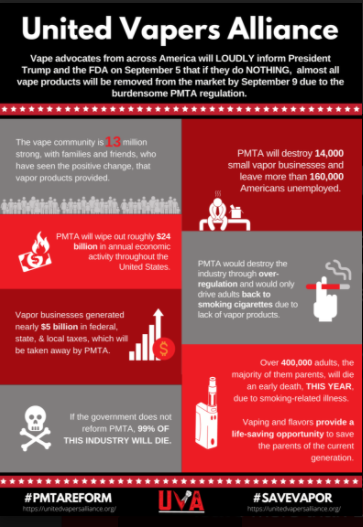 To this effect, the United Vapers Alliance has organized a peaceful rally in DC, “We Vape, We Vote” aimed at showing that the protesters vote will go to whoever fights for the vaping industry. The rally participants vowed to continue to push against lawmakers who stand for prohibitionist policies, that threaten access to safer alternatives.

“If President Trump does not deliver on real reform at FDA, he is not only risking the destruction of an American industry, but he will be also be creating a situation where millions of adult ex-smokers could return to deadly combustible cigarettes,” said Dimitris Agrafiotis, who serves as executive director of the Tennessee Smoke-Free Association.

“HHS Secretary Alex Azar has pledged PMTA reform, but he failed to deliver. Now, it is up to President Trump to stop the FDA from destroying 99% of the industry and leaving 160,000 Americans unemployed in the middle of the COVID-19 pandemic.”

As part of the rally, over 20 vapers shared life-changing stories on how vaping has helped them quit smoking and transformed their lives, positively impacting even their friends and family. They were also joined by featured speakers and leaders in the industry Dimitris Agrafiotis, executive director of the Tennessee Smoke-Free Association; Amanda Wheeler, president of Rocky Mountain Smoke-Free Alliance; and Gregory Conley, president of American Vaping Association.

This is UVA’s second annual Save the Vape rally and they continue to ask vaping advocates from across the nation to call the White House Switchboard and say, “We Vape, We Vote”.