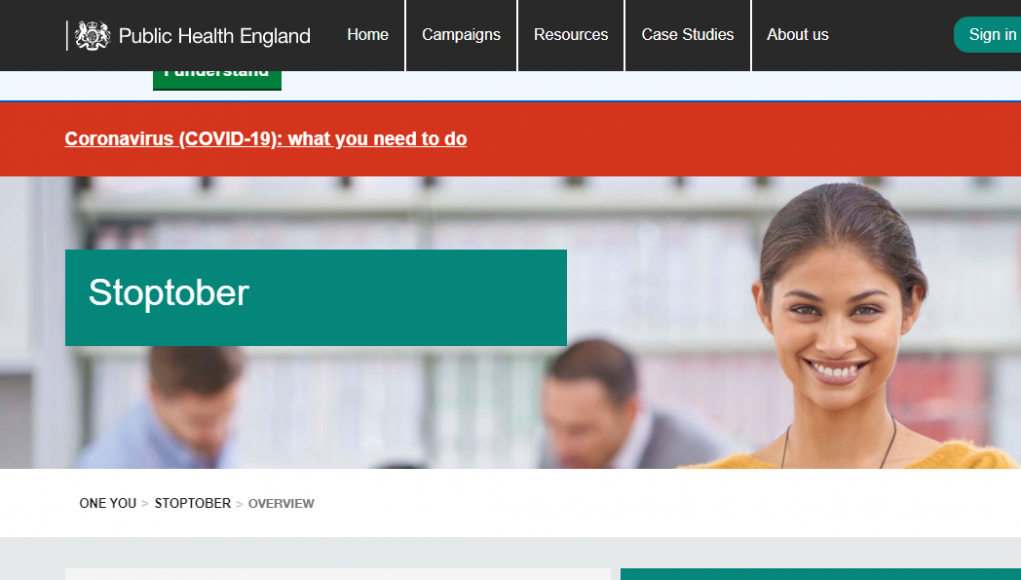 Stoptober, a yearly campaign created by Public Health England (PHE) launched in 2012, encourages smokers in the UK and across the globe to quit smoking for the month of October. The idea behind it is that if they manage to quit smoking for a month they would be filled with renewed confidence, as research has indicated that if a smoker can quit for 28 days, they are more likely to quit for good.

“This year’s Stoptober will look and feel quite different to previous campaigns. Firstly, it will carry the new ‘Better Health’ branding which has been created to support a national health reset moment that launched at the end of July with a focus on obesity. This new branding approach responds to new challenges brought about by the COVID-19 pandemic and the impact it’s had on people’s health behaviours,” reads the campaign’s intro.

This year the campaign also seeks to be more successful by addressing the needs of different age groups differently. “Secondly, this year we will focus on two distinct audiences who we know from our research have different views and motivations toward making a quit attempt: a primary audience of smokers aged 35 to 60 and a secondary audience of younger smokers aged 18 to 34 (both focusing on C2DE socio-economic groups).”

“New Zealand’s rate might be lower at 12.5%, and we may have kept Covid-19 largely at bay, but let’s not forget 5,000 Kiwis still die every year from smoking-related illnesses.”
In the UK, the campaign is fully supported by a number of health entities including the NHS, Ash, the British Lung Foundation, the British Heart Foundation and Cancer Research UK. AVCA co-director Nancy Loucas, said that while New Zealand should be commended for its Government-funded ‘Vaping To Quit Smoking’ campaign, dropping Stoptober will still prove counterproductive to reducing local smoking rates.

“Stoptober gets some real cut-through in the UK, helping many smokers to successfully quit. In New Zealand we hear a lot about ‘Dry July’ every year. However, it’s time the Government once again got in behind Stoptober, with this year presenting a unique opportunity given Covid-19,” she said.

Smoking cessation is currently more important than ever

Loucas added that given the current pandemic, decreasing smoking rates is more important than ever. “Given the global pandemic, it’s well established that the best thing smokers can do to protect their heath and boost their immune system is to kick their cigarettes. In fact, more now want to as Covid-19 has made people much more cognisant of their personal health and vulnerability to illness.”

“Over two million British smokers have made a ‘quit attempt’ since Stoptober began eight years ago, and today their overall smoking rate is 13.9% – a record low. New Zealand’s rate might be lower at 12.5%, and we may have kept Covid-19 largely at bay, but let’s not forget 5,000 Kiwis still die every year from smoking-related illnesses. 2020 would’ve been a perfect year for the Ministry of Health to get in behind Stoptober, but unfortunately they completely missed the boat,” added Loucas.