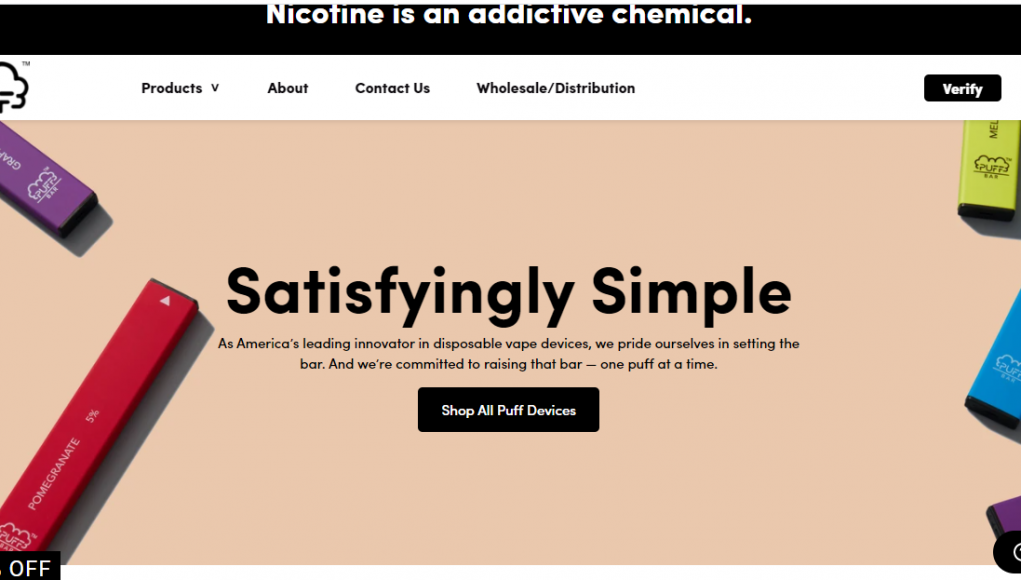 Facebook
Twitter
Pinterest
WhatsApp
The CDC has previously said that the nicotine salts lead to a higher consumption of nicotine, making the device particularly dangerous for teenagers.
Puff Bar sells disposable e-cigarettes online in a range of flavours including pink lemonade, tobacco, and strawberry, and colours (some of which light up when used). The devices contain 5%, or 50mg, of salt nicotine.

In the US, amidst growing concerns pertaining to the popularity of the Juul device which also delivers nicotine via salts, the Centers for Disease Control (CDC) has previously said that the nicotine salts lead to a higher consumption of nicotine, making the device particularly dangerous for teenagers.

Meanwhile since the flavour ban in 2020, Juul sales have dropped significantly, more specifically by 18% as revealed in the recent US Virtual E-Cigarette summit. “Flavourings play a role in attracting children towards tobacco products,” said Prof Richard Miech, lead investigator at the Institute for Social Research at the University of Michigan which studied the impact of the ban on young consumers. “We noticed the growth of e-cigarette use in youths hit the brakes in 2020. Teen use of Juul declined from 2019-20 at a record rate.”

However this decline was offset by an increase in the use of other devices, such as disposable vapes, which were exempted from the ban. In 2020, Puff Bar became the third most used e-cigarette brand among teenagers.

Vaping teens would be smoking if e-cigs were not available

Parents and teachers in Queensland Australia are also growing concerned about the increased use of the Puff Bar disposables. Meanwhile, in line with previous studies and arguments by public health experts, a recent article published in Nicotine & Tobacco Research, found that if vaping products had never come to exist, those teens who currently use the products, would be smoking instead.

The researchers conducted a regression analysis of 12th-graders with data retrieved from the “Monitoring the Future” repor, a survey conducted by the federal government’s National Institute on Drug Abuse (NIDA) that measures different forms of drug use by adolescents nationwide. On the contrary of a gateway effect, the study authors found that actually the youth who do vape tend to be those who would have been smokers if vapes never came into existence.

“Our model predicted smoking prevalence quite accurately prior to the availability of e-cigarettes,” Sokol told Filter. “But once e-cigarettes became available in a widespread way, it increasingly overestimated the prevalence [of smoking]. So the prevalence was decreasing, but our model based on a pre-e-cigarette era was predicting a decrease but not as steep.”