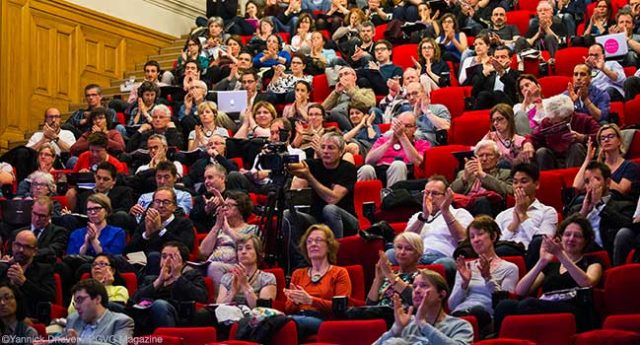 Consensus around the low toxicity profile of e-cigarette

All attendees, even the most reluctant to e-cigarette, the associations Droit des Non-Fumeurs (DNF) or Comité National Contre le Tabagisme (CNCT) agreed on one point: e-cigarette is a useful tool for tobacco smoking withdrawal and its emissions are 95% less harmful than tobacco smoke. Personal vaporizer, a term that Jacques Le Houezec prefers, is then to be recommended to any smoker wishing to quit smoking.

From the flavor side, a large majority of the attendees acknowledge that it is important not to ban flavors to keep e-cigarette’s attractiveness. Some contributors however would like more studies to be carried out in order to focus on the risk of certain specific flavors.

Another consensus was found that vaping is not a gateway to adolescent smoking. Nevertheless, it requires to be monitored and some contributors request a cohort survey over several years, at least 3 years, in order to increase the knowledge in this domain.

The biggest disagreement comes from the ban on vaping in public places. The Réseau de Prévention des Addictions (RESPADD), of which Pr B. Dautzenberg is a member, wishes a compromise to be found for each situation while Tabac et libertés is in favor of a ban in order not to re-normalize smoking but expects flexibility in working places. Fédération Addiction expressed the wish for a charter to be signed. A complete ban is asked by DNF.

Everybody is in favor of a ban on indirect advertisement of tobacco products. Nevertheless, information on vaping product should be allowed in specialty shops. A consensus was not found for the latter in the public domain.

The oral presentation of Benoit Vallet, Director General of Health (DGS) gave rise to eddies throughout the audience. His compassionate and caring discourse on the e-cigarette irritated some people who could not reconcile his speech with what government is setting up. Jean Moiroud, President of the Fédération Internationale de la Vape (Fivape), recalled the authority that his emails regarding TPD’s implementation remained without answer. Claude Bamberger, Vice-President of the Association Indépendante des Utilisateurs de Cigarette Électronique (Aiduce) deplored that Tabac Info Service (French call-service for tobacco) does not mention personal vaporizers among possible withdrawal products. He also asked what would be the place of the personal vaporizer during the operation “Moi(s) sans tabac” (myself (month) without tobacco), next November. Jacques Le Houezec deplored DGS’s lack of support for organizing this First Vape Summit. He also regretted Benoit Vallet did not attend to the whole day’s presentations.

But before leaving, Benoit Vallet made some promisses. In addition to his will to collaborate with the Fivape, he also proposed the creation of a specific taskforce to work on the e-cigarette within the agency.

This latest announcement was received as a reward by Jacques Le Houezec who declared: “I had high expectations for this meeting, otherwise I wouldn’t have done it. It has been a hard job and I have received helpful support of the co-organizers  Didier Jayle and Bertrand Dautzenberg and of the many tobacco harm reduction organizations whose recommendations are generally followed by the authorities. They made it possible, on Sunday evening, to count on the presence of the Director General of Health, Benoit Vallet. The promise of formation of a taskforce dedicated to the e-cigarette is for me the most positive point of this summit. We will work on its installation and we already think about a second meeting.”

Sébastien Béziau, Vap’you’s blogger and “man behind the scenes” of this summit (he largely contributed to communication around the Summit and launched a petition for the French Minister of Health, Marisol Touraine’s coming) also sees a success: “Jacques managed to gather all parties involved as well as the DGS. Vaping becomes a tool warranted by the community in the framework of tobacco harm reduction. It is for me the most successful completion that Jacques can claim after the Summit“.

A press release by the organizing committee is available here.