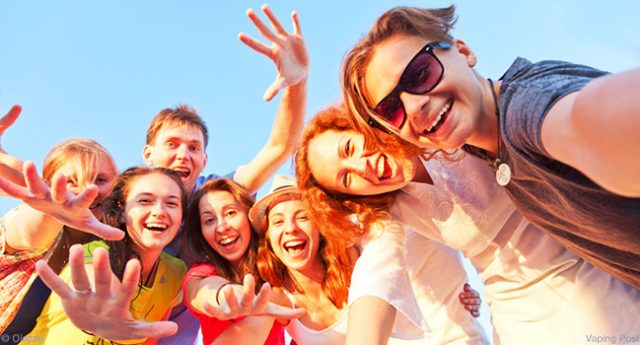 The article points out that nicotine is “assumed” by the authorities to be the predominant substance that the youth vape, although this assumption is not based on scientific data. In a context where the most vaping-reluctant advocates make the personal vaporizer a vector of the “nicotine epidemic”, authorities misleadingly put forward that vaping is gateway to smoking and nicotine addiction.

In order to make things clearer, Dr Richard Miech from the University of Michigan, principal investigator of the Monitoring the Future Study, and his co-authors examined what substances US youth vape.

“Ever use of a vaporizer” was asked to about 15,000 teenagers as well as the substance that was vaporized the last time they vaped (“Nicotine”, “Marijuana or hash oil”, “Just flavouring”, “Other”, and “Don’t know”). For those who responded positively to “even use”, the frequency of use over the last 30 days was also surveyed (0, 1–5 days and >5 days).

Such findings are likely to dampen the impact of the tobacco/nicotine use among adolescents. Among discoveries, the authors also point out that flavouring was more likely to be vaped by Hispanics (compared to Whites) and females; Whites and males are more likely to vape nicotine.

Are adolescents aware of what really contain e-liquids?

One could argue that teenagers are not aware of what makes up their e-liquids. It is one argument that has been proposed by the CDC to diminish the power of Miech’s analysis, reports USNews. The authors who acknowledge the limitations of “self-reported” studies, anticipate this point by noticing that “most accurate knowledge of substances vaped is expected to be among the most experienced users, which in this study are the 12th-grade students who vaped six or more times in the last 30 days and presumably are more intentional in the substances they vape“.

It comes out from other studies that teenagers perfectly know what they inhale, especially if they vape for tricks. For the latter, an English study reports that nicotine is the substance to avoid.

Cloud tricks among youngs: A new socialization of vaping

A French survey of teenagers in Paris, carried out by Pr Bertrand Dautzenberg, converges with Miech’s conclusions. In France like in the USA, youth vaping is raising while youth smoking regresses and almost the same proportion of young vapers disregard nicotine use in their devices in favor of flavorings.

Regulating vaporiser devices or the substances that are vaped?

A point is made apparent by the authors when reporting that the making use of the term ENDS literally implies the delivery of nicotine by the vaporizer, which is not the case for all models of vaporizers, like e-cigarettes.

Based on recent assumptions that vaping would lead to cigarette smoking in future, the authors are literally bouncing off to suggest young vapers “are candidates for primary interventions, which are particularly strategic to combat nicotine“. Primary prevention programs aim at nicotine use and  gain in efficiency if specifically addressed to young vapers.

As discussed by the researchers from the University of Michigan, the implications are multiple and raise regulatory questions. One of them addresses the regulation of nicotine e-liquids compared to the vaporizer itself. A question that is particularly pertinent in the current one-size-fits-all context, almost lethal for the vaping industry, where the US FDA recently answered nicotine-free e-liquids would be evaluated on a case-by-case basis.