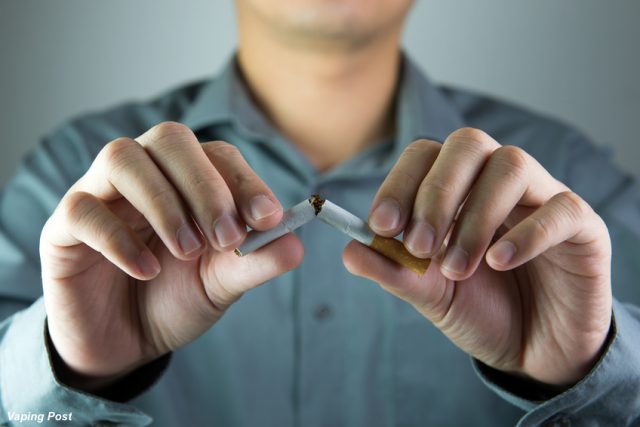 The 2015 Addiction Monitoring in Switzerland, published in October 2016, found the e-cigarette was most frequently reported tobacco cessation mean (5.8%) among hard smokers, before nicotine chewing-gums (3.8%), nicotine patches (3.4%) and the literature (3.3%).

The last figures depict a very different landscape compared to the the situation, two years earlier, when nicotine chewing-gums (9.2%) and nicotine patches (6.9%) were the most favorite ways hard smokers were choosing to wean off tobacco. At that time, the e-cigarette only represented 2.7% of the cessation aid panel.

Further findings indicate that above one out of two (52.8%) smokers wants to stop smoking in the coming months, a number that is increasing compared to former surveys. For those who don’t want to stop, the reasons evoked are “the pleasure” (for 49% of the hard smokers and 60.7% of occasional smokers).

The “Pleasure Principle” is what attracts most smokers when switching to the e-cigarette. And an enhancer of this pleasure is the fact that e-cigarettes bring variety to vapers and a safer habit compared to smoking combusted tobacco cigarettes.

The relative risk of vaping compared to smoking is a notion that most Swiss smokers have probably understood since their reasons to stop were “to prevent diseases” (33.4%) and the “health consequences of smoking” (16.1% in net decrease compared to 2013: 21.1%).

A political status quo with openings to a more liberal view

The Swiss Tobacco Product Control Act (LPTab) is currently under review and the increased popularity of the e-cigarette comes timely in the regulatory agenda. Let’s recall that, last June 2016, the Swiss Council of States recommitted the LPTab draft version that was assimilating the e-cigarette as a tobacco product. A proposition that has been vigorously opposed by the Committee on Social Security and Public Health Of the States Council (CSSS-E).

The Swiss association Helvetic Vape has not yet commented officially on the last figures of this survey but it is conceivable that this publication reinforces their position before the government to legalize nicotine in e-liquids and to regulate vaping products separately from tobacco products: The choice of Reason. Who would send back the alcoholics to alcoholic beverage stores and pretend that it is for their own good?

9.0% smokers willing to stop smoking have tried an e-cigarette during the last 30 days and only 2.7% among those who are not interested in smoking cessation. The report pinpoints that the use of the e-cigarette as a smoking cessation aid remains low compared to the European neighbour. Nevertheless, by facilitating the access to nicotine e-liquids, the Health Authorities would reassure the public with regard to vaping and facilitate the transition from smoking to vaping.

No conclusion on the impact of the e-cigarette on smoking cessation but a strong signal, still

It is stated in the report that it “doesn’t allow concluding on the impact of e-cigarettes for smoking cessation”, however it gives serious indication that the situation may be improved by easing the current regulation on e-liquids and a strong signal to the government, as demonstrated by the observed threefold interest in the e-cigarette for smokers willing to stop compared to rebels.

More on the fight of the consumer association Helvetic Vape: