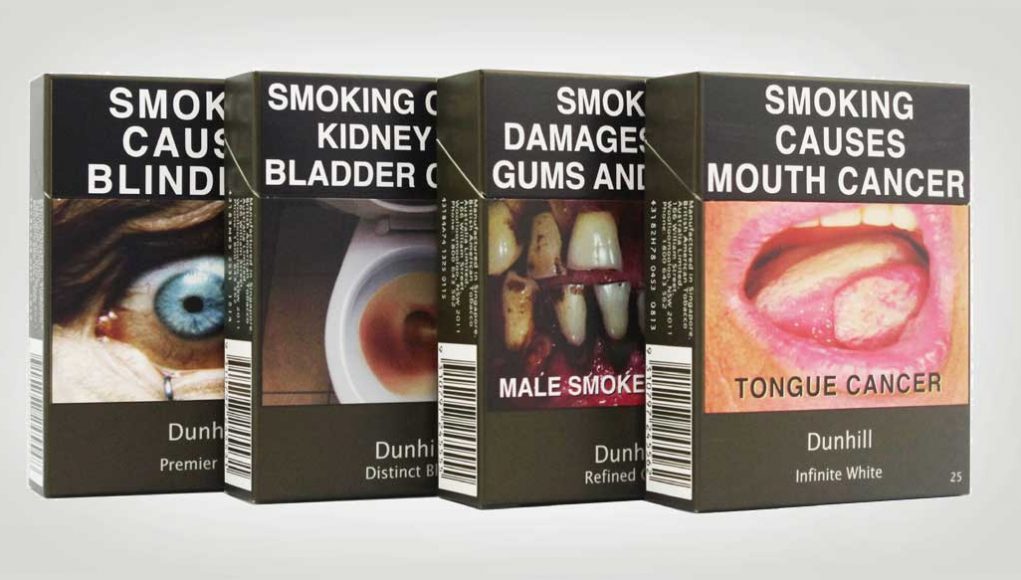 In October 2018, Singapore’s Ministry of Health (MOH) had announced that it would be introducing standardised packaging for tobacco products, including cigarettes, cigarillos, cigars, beedies (thin cigarettes wrapped in a leaf), ang hoon (loose tobacco leaves) and other roll-your-own tobacco products, as part of ongoing efforts to reduce local smoking rates.

The regulations includes a clause requiring graphic health warnings that cover at least 75% of the packet.
“Tobacco use is a major cause of ill-health and death in Singapore,” said the MOH in a press release at the time. “More than 2,000 Singaporeans die prematurely from smoking-related diseases annually. Daily smoking prevalence amongst Singaporeans has been fluctuating since 2004, with no clear pattern of sustained decline.”

The measure has finally gone into effect, and besides plain packaging, meaning that all logos, colours, images and promotional information on the packaging of tobacco products should be removed, it includes a clause requiring graphic health warnings that cover at least 75% of the packet.

Anyone caught not complying to this regulation can face a fine of up to $10,000 and/or a jail sentence of up to six months. The MOH emphasized the fact that a year’s notice was given before setting in place the measure, giving tobacco manufacturers, importers, wholesalers and retailers time to adjust and prepare for the new measures.

The government to subsidize NRTs

Meanwhile, earlier this year Senior Parliamentary Secretary at the Ministry of Home Affairs and Ministry of Health, Mr. Amrin Amin, had announced new smoking cessation pilot programmes. He explained that Singaporean smokers enrolling in these programmes would be entitled to full subsidies for nicotine replacement therapy (NRT) in order to help them quit smoking.

Sharing details about the initiative during the MOH budget debate in March, Amin said that the programme aims to reach approximately 10,000 smokers. Applicants would benefit from intensive behavioural support, follow-up for up to a year and a three-month NRT supply.