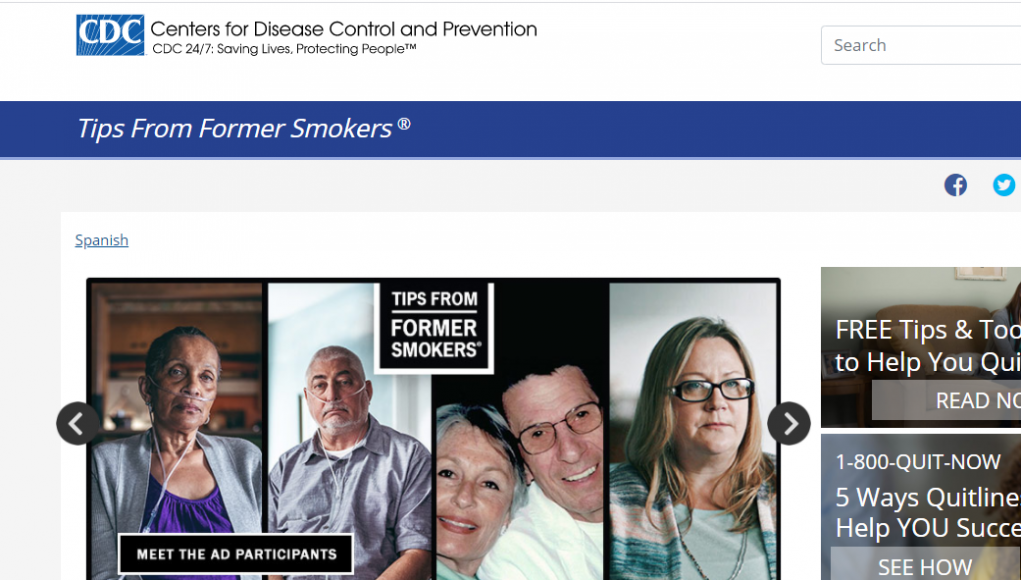 An analysis of the campaign has reported that smokers who saw public service announcements launched by the initiative, were nearly 20% more likely than others to attempt quitting. Up to 40% of smokers attempted to quit after seeing the announcements and about one-third of smokers who didn’t see the messaging attempted to quit during the seven-year periods they aired on television and elsewhere, reported CDC researchers.

The CDC launched the campaign in 2012. “Tips From Former Smokers — or Tips” aimed to encourage smokers quit by illustrating real-life health consequences of tobacco use and promoting evidence-based resources for quitting. The campaign aired public service announcements featuring former smokers and their families on television, as well as online and in print publications.

Campaigns based on personal stories are more powerful

Findings reporting the effectiveness of the campaign were published by the CDC’s electronic, peer-reviewed journal, Preventing Chronic Diseases. “This study reinforces that mass media campaigns can increase quits and quit attempts as part of a comprehensive approach to reducing smoking-related disease and premature death in the United States,” Rebecca Murphy-Hoefer, the lead investigator of the campaign.

“Research shows that emotionally evocative, evidence-based campaigns are effective in raising awareness about the dangers of smoking and encouraging people who smoke to quit,” she said.

“Decades of research have demonstrated that more tailored… promotional messaging will always be more successful than approaches that are less tailored, personalized or relevant to the audience,” a spokeswoman for the Truth Initiative, another well-known smoking cessation campaign, told UPI.

“Storytelling and personal narratives are widely regarded as compelling and powerful ways of engaging audiences, [so] it seems natural that testimonials from former smokers could be a meaningful way to persuade others to quit,” she said.

Meanwhile, anti-vaping campaigns keep popping up across the States. A recent article on the National Review rightly pointed out that given teenagers’ natural inclination to rebel and be curious about any forbidden substance and activity, the approach that American policymakers are taking to combat teen vaping, is in most cases counterproductive.

The article rightly points out that “..telling adolescents that youth vaping is an “epidemic” (i.e., all your friends are doing it) — but that it is a risky habit meant only for adults (i.e., it’s cool) — hasn’t worked.” After years of steady decline in the numbers of teen vaping, rates spiked again in 2018 and 2019, in parallel with the increase in awareness and numerous teen vaping campaigns.

“As I argue in a new study, youth experimentation with vaping increased not in spite of anti-vaping messaging but because of it. If we want to reduce teen interest in vaping, we shouldn’t give anti-vaping campaigns more money; we should end them,” adds the author.

The article explained that this inclination to rebel against authority is called “reactance” in psychology, and there are many examples of this in Us history, such as D.A.R.E., an 1980s-era anti-drug campaign, which research indicated not only did not discourage teens from drinking and/or using drugs, but made them more likely to.

CVA: Misinformation and Harsh Bans Drive Vapers Back to Smoking