Published in JAMA Pediatrics, the study titled, “Changes in Prevalence of Vaping Among Youths in the United States, Canada, and England from 2017 to 2019”, believes that the Higher nicotine content available in North America as opposed to Europe, may be to blame for the higher rates of teen vaping.

The pros and cons of a nicotine cap

Within the EU, the Tobacco Products Directive (TPD) which came into effect in May 2017, bans the sales of nicotine containing e-liquids above 20 mg/ml. Public health experts have long argued that setting nicotine caps on safer alternatives such as vaping products, would have a detrimental effect on national smoking rates, pushing former smokers back to smoking.

The enactment of this nicotine limit follows an amendment banning all kinds of flavoured e-cigarettes and juices, gone into effect on April 1st.
However on the flip side, the regulation may be having a positive effect on teen vaping rates, ensuring that teens do not become addicted to nicotine. A survey of more than 12,000 Canadians aged between 16 and 19 conducted between 2017 and 2019, had found that the number of participants reporting previous month use had more than doubled, from 8.4% in 2017 to 17.8% in 2019.

To this effect, Nova Scotia has approved the 20mg/ml nicotine cap on vaping products, making it the first Canadian province to adopt such a restriction. The move follows an amendment banning all kinds of flavoured e-cigarettes and juices, gone into effect on April 1st.

“This is about reducing the rates,” said Health Minister Randy Delorey about the ban. “What we’ve seen in the last couple of years since e-cigarettes have become widely available in Canada and indeed throughout much of North America is a rapidly growing rate, in particular youth vaping.”

British Columbia will be setting in place the same nicotine limit

At the time, Health Minister Adrian Dix had emphasized that B.C. would be taking strong actions with regards to teen vaping. These were to include educating the public, working with partners, implementing regulations to prevent access and pressuring the federal government to take further action.

Dix had said that this action would be the first-of-its-kind in Canada, and the aim is to make vaping as socially unacceptable as regular smoking is to young people. One of the included measures was a sales tax increase from 7% to 20% on vaping products. 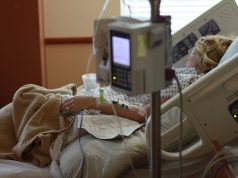